Neons are reflected on the roof of a car in Bangkok's Chinatown on Jan. 6, 2016
Christophe Archambault—AFP/Getty Images
By Hannah Beech / Bangkok

Wang Yiliang worked as a super in the Bronx, toiling 10-hour days in a 10-floor building. Before that, he washed dishes in San Francisco’s Chinatown, as well as mounds of hotel sheets in Queens. Little did the tenants on New York City’s 231st Street know that the man who mopped their hallways and unclogged their toilets was once one of China’s most daring writers, a philosopher-essayist whose underground literary journals earned him two years in a Chinese labor camp.

Life in exile has a way of pushing even the most celebrated into obscurity. How many taxi drivers or housekeepers used to fight for political reform back home before fleeing abroad? “Every day, I try to write something, even a little bit,” Wang, 52, says. “In prison or in exile, you have to exercise the mind.”

Now add danger to the list of indignities faced by exiled Chinese dissidents. A naturalized American citizen, Wang spends most of his time in Thailand, enjoying the sun and surf along with winter refugees from Russia. Thailand has traditionally welcomed hundreds of thousands of migrants from all over the region, even setting up extensive camps for displaced ethnic minorities from neighboring countries. But since Wang arrived in the Southeast Asian kingdom, three of his fellow Chinese-born political exiles have been spirited back to China and are now in detention back home. Another Chinese dissident in Thailand disappeared last month; his friends worry that he too may have been the victim of Beijing’s mounting campaign of overseas renditions.

Last year, Thailand deported to China around 100 ethnic Uighurs native to China’s northwest, a mass extradition that was dubbed “a flagrant violation of international law” by the U.N. High Commissioner for Refugees (UNHCR). “We are small people compared to big geopolitics,” says Wang, who worries that even his American passport might not protect him should Chinese security agents come knocking. “I have already experienced prison so I know what the worst is. But some Chinese, they are in Thailand because they don’t want to go to jail. That’s why they are so scared.”

Since a 2014 coup, Thailand has been governed by a military junta that has pivoted away from Washington, with its lectures on the superiority of democracy, toward Beijing. “We are good friends with China,” says Panitan Wattanayagorn, security adviser to Thailand’s Deputy Prime Minister. “We welcome their tourists, and their investments. We want to benefit from the rise of China.” (Panitan notes that Thailand is “friends” with many other countries too, part of the kingdom’s historic balancing act between great powers.) Last year, Thailand and China conducted their first joint military exercises, two weeks of air-force drills. (More extensive military cooperation with the U.S. continues as well.) The number of Chinese tourists to Thailand has grown tenfold in less than a decade.

At a time when overall foreign investment to Thailand fell by nearly 80% last year because of political instability, Chinese deals are crucial to resuscitating the Thai economy. It’s a financial imperative hardly unique to Thailand. Dozens of countries now count China as their largest trading partner. “If I were a woman,” Thailand’s then Foreign Minister Tanasak Patimapragorn told his Chinese counterpart Wang Yi last August, “I will fall in love with his excellency.”

Read Next: Hong Kong’s Existentialist Anxieties Continue to Mount in the Face of China’s Encroachment

The fear of rendition is particularly acute in Thailand. More than a dozen Chinese asylum seekers say that in recent weeks they have been followed by unknown Chinese men whose bearing reminds them of the plainclothes security who tailed them back at home. They say they have gotten used to alerts notifying them that someone has accessed their email accounts from a different location. Once a cohesive group, the band of Chinese exiles in Thailand — numbering in the hundreds, according to traffickers who helped them on their trip southward — has fractured, amid worries of infiltrators sending information back to Beijing. Some dissidents refuse to tell other Chinese where they live in Bangkok, while others turn away when friendly Chinese strangers approach them at Thai refugee centers set up by NGOs.

“In China, I knew that there was danger so I could be prepared and take actions, but I never imagined that I would be so scared in Thailand,” says Yu Yanhua, who escaped to Thailand last year via neighboring countries. Yu was once such a loyal employee of a Chinese state-owned coal company that she was honored as a National Model Worker. Her son-in-law is a professor at one of China’s top universities. But after pushing for rights enshrined in China’s own constitution as part of the so-called New Citizens’ Movement, Yu was repeatedly incarcerated. “To leave home, it is a very tragic thing,” she says. “But I had no choice.”

Yu knew three of the Chinese men who have vanished in recent months. Two, Jiang Yefei and Dong Guangping, were deported by the Thai government last November for immigration violations, despite possessing papers from the UNHCR confirming they were to be resettled in a third country. Although Thai officials at the time claimed they did not know of the men’s registered refugee status, UNHCR staff and two senior Western diplomats say the Thais were, in fact, aware. Jiang and Dong, both veteran dissidents, had formed the grandly named China Democracy Party with Yu and other political exiles. Jiang, who had been in Thailand for years, was also a key figure in the underground railroad bringing Chinese dissidents to Southeast Asia. In fact, Yu had escaped to Thailand with his help.

Another of Jiang’s charges was less successful. Last year, say other activists, Jiang tried to help the son of imprisoned Chinese human-rights lawyers escape to Thailand so he could attend university overseas. But Bao Zhuoxuan, whose passport was earlier confiscated by Chinese authorities, never made it. Security forces in a Burmese town on the Chinese border forced the teen back to China. He is now under surveillance in Inner Mongolia. Earlier this year, Bao’s parents were formally charged with political subversion, serious crimes that in his mother’s case could earn a life sentence. Dozens of lawyers and legal activists have been targeted in recent months, amid President Xi’s crackdown on human-rights defenders.

Even foreign passports don’t seem to protect Chinese-born exiles. Gui Minhai, a publisher of scandalous tales about China’s political elite, disappeared from the Thai beach town of Pattaya last October. The naturalized Swedish citizen was last seen accompanied by an unknown Chinese man. Days later, more Chinese men showed up at his apartment and took his laptop. Last month, Gui turned up on Chinese state TV, claiming he had returned to China to atone for a fatal car crash more than a decade ago. In his televised confession, Gui disassociated himself from his Swedish passport: “I truly feel that I am still Chinese and my roots are in China.”

The latest Chinese dissident to vanish in Thailand is journalist Li Xin, who only chose political exile recently. Li, who worked in the digital operations of a southern Chinese newspaper before fleeing abroad last year, was last in contact with his family and friends on Jan. 11, when he was heading toward Laos for a visa run. During his brief exile, Li had already leaked a list of words censored at the Southern Metropolis Daily; he also claimed that he escaped China because he would otherwise be forced to spy on dissidents and other journalists. “His disappearance is a great shock to refugees in Thailand,” says Yan Bojun, another Chinese asylum seeker in Bangkok who met with Li days before he disappeared. “He’s not an important person. If he was captured, who is next?”

Yan wonders if he might be a target soon. A former official from a Beijing suburb, he was once a member of the Chinese Communist Party and wrote a thesis on Marxist political and economic thought. Yan only became disillusioned after one of his jobs was to negotiate with residents whose houses were being demolished by the local government. After having joined the New Citizens’ Movement while teaching at a Beijing university, Yan spent more than a year on the run before deciding to flee to Thailand, via Burma and Laos. A trafficker plotted the route for a $1,600 fee. Yan hopes to convince U.N. officials that he deserves political asylum — but that meeting won’t happen until early 2017 because of a backlog at the agency. In the meantime, Yan moves house often, trying to evade the strange Chinese men who always seem to turn up in his neighborhood. “To decide to go into exile is a very difficult decision,” he says. “When I made it, I didn’t think my life would turn out like this.” 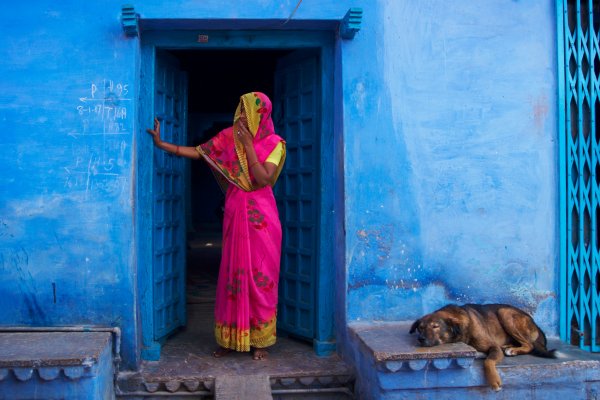 Hindu Women in Dehli Can Now Be the Head of Their Own Families
Next Up: Editor's Pick