Ted Cruz did something Monday night you almost never see. Beaming out at supporters at the Iowa state fairgrounds in Des Moines, the Senator who stumps with robotic precision kept glancing down at his notes.

After a convincing victory that cemented his spot in the top tier of Republican field, Cruz had a few fresh riffs for the faithful. But if you want to know how he beat Donald Trump and Marco Rubio in the first-in-the-nation contest, it was a forgettable promise that told the story.

“When the sun rises tomorrow, this campaign will take the next step,” Cruz told the crowd. “We will continue to campaign the same way, sitting down person to person, leader to leader, VFW halls to Dunkin Donuts.” He is, after all, headed on to New Hampshire.

In Iowa, Cruz won the old-fashioned way: he out-organized, outraised and outhustled his top rivals. In the end, he captured the most votes in caucus history—”48,608,” he boasted—in a dramatic contest that smashed turnout records. Cruz notched 28% of the vote, notching a convincing win over Trump, with 24%, and a late-surging Rubio, who earned 23%.

In a year when every fresh twist seemed to shred the political rulebook, Cruz struck the first blow by betting big on tradition. As Trump filled sports arenas and airplane hangers, bragging that he was beholden to no one’s rules, Cruz campaigned “the Iowa way,” he told crowds, visiting a blur of taverns, community centers and middle-school cafeterias, hoping the Hawkeye State would once again reward retail spadework. “Sixteen, 18 hours a day, six or seven days a week,” he said. “We are not tired at all.”

From the start, Iowa was the first stage of Cruz’s master plan. He wanted to position himself as a most conservative candidate in the field, assemble first-rate field and data operations, and augment his Tea Party base by winning Evangelicals and libertarians. All while raising the money to demonstrate that he’s a national threat, not a one-state sensation.

The campaign built a ground game that left rivals marveling, with more than 1,500 precinct captains and 12,000 volunteers making more than 25,000 calls a day in the home stretch. More than 800 out-of-state diehards bunked down at Camp Cruz, a converted dorm for volunteers that the campaign plans to replicate in New Hampshire and South Carolina.

He visited each of the state’s 99 counties, crisscrossing the Hawkeye State with marathon bus tours. The final week of the race, as the attacks piled up and his polls numbers slipped, he stayed the course, campaigning in frozen hamlets barely big enough to field a football game. The strategy boosted him past a deep field of strong candidates, several of whom teamed up during the race’s closing stages to launch withering assaults on Cruz’s conservatism and character.

On a night with a snowstorm barreling toward the state, he survived a record Republican turnout of 185,000, a figure that smashed the previous mark by some 50%. When the bombastic magnate pulled ahead in the race’s final weeks, Cruz’s inner circle stayed calm, relying on internal polling that showed him with a slight lead on their turnout models of around 135,000.

But aides frankly conceded they did not to expect to win a race with skyrocketing turnout, assuming the influx of newcomers would line up behind Trump.

The win will dent Trump’s mystique, and quiet the whispers that the blustering businessman might coast to the nomination. A self-anointed winner, Trump’s record now stands at 0 and 1. “The complexion of the race changes overnight,” says Bob Vander Plaats, Cruz’s Iowa campaign co-chair. “We punctured his narrative.”

Now Cruz wants to change the narrative about himself. Iowa is the kind of place where a candidate can win on sweat and gas money. Past caucus winner like Mike Huckabee and Rick Santorum rode out of Iowa in rickety jalopies. But the Texan chugs out of Iowa in a slick locomotive, with a deep organization in the southern states that begin voting in March and $19 million on hand, more than $8 million more than Rubio, his nearest rival. Ever determined to prove his viability, he even plugged his fundraising prowess in his victory speech.

Cruz should get a boost of money and momentum from Monday’s win, but his hardline conservatism is an uneasy fit for New Hampshire, a state that is far less evangelical and likes to knock caucus winners down a peg. He arrives with a target on his back and, in Trump, a wounded rival apt to escalate an already nasty feud. Beyond that is a knife fight in South Carolina before the remaining campaigns make the turn toward the so-called SEC Primary.

As he savored the victory with a long speech before a cheering crowd, Cruz—who often compares this election to Ronald Reagan’s victory in 1980—reached for echoes of Reagan. “Tonight Iowa has proclaimed to the world: morning is coming.”

It wasn’t quite as overt, but Cruz also invoked a second President in his remarks. “Courageous conservatives said ‘yes we can,” he told the crowd, borrowing a phrase from Barack Obama. Later, he flattered supporters as Obama did, telling them that the force behind the victory was not him but “you.” Cruz and Obama are polar opposites in most ways. But the Texas Republican modeled his winning Senate campaign off Obama’s 2008 Democratic primary playbook, even passing out copies of campaign manager David Plouffe’s book for his staffers to study.

And why not? Obama was then a young first-term Senator who was written off early by the pundits, but rode grassroots magic and a boatload of money to an upset victory over Hillary Clinton. Nine months from now, Cruz is hoping to write a similar ending. 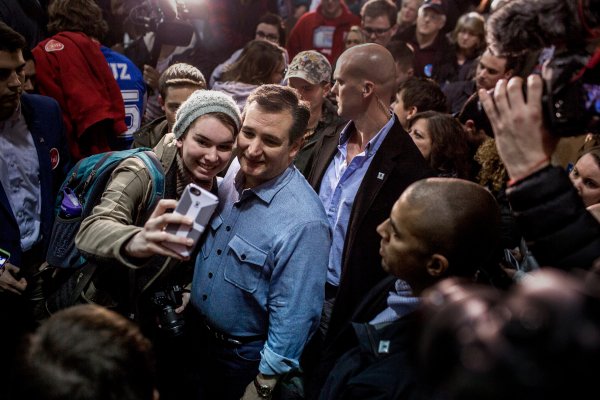 Cruz Cruises, Dems in 'Virtual Tie'
Next Up: Editor's Pick