This Is How the National Prayer Breakfast Got Its Start

Thousands of people will attend the 64th annual National Prayer Breakfast on Thursday morning, an annual event attended by every President of the United States for decades.

But how did the breakfast become a presidential institution all those years ago?

The first president to attend the prayer breakfast was Dwight D. Eisenhower in 1953, but credit for the idea goes back to Abraham Vereide, a Norwegian immigrant and Methodist minister who lived in Seattle.

In the mid-1930s, Vereide organized local groups of politicians and businessmen to talk and pray together before work, a time which wouldn’t interfere with professional or family obligations. Seeking to motivate invitees to address the problem of poverty, he relied on the personal connections forged at the meetings and the personal evangelism of the attendees to spread his ideas. His initiative grew, expanding to other major cities, including New York, Chicago and Los Angeles. In 1942 Vereide moved to Washington D.C., where he started breakfast prayer groups for members of the House and the Senate. Republican Senator Frank Carlson of Kansas, a close friend and adviser to Eisenhower, attended one of these prayer groups. It was through him that the 1953 breakfast connected the House, Senate and President.

As President Reagan explained during his own speech at the 1986 National Prayer Breakfast, Eisenhower had told Carlson that the White House was “the loneliest house I’ve ever been in” so Carlson suggested Eisenhower meet with his prayer group. That meeting turned out to be the first joint prayer breakfast.

On Feb. 5, 1953, just over two weeks after he was inaugurated, Eisenhower attended the dedicatory prayer breakfast of the International Christian Leadership, the name Vereide gave to his movement (it continues to exist today, now known as the Family or the Fellowship). Attended by some 500 people, the breakfast was held at Conrad Hilton’s Mayflower Hotel in Washington D.C. The AP described it as “a special invitation prayer breakfast for Senate and House members who have been meeting weekly at the Capitol to ask divine guidance.”

Eisenhower called it a “wholly enjoyable occasion” and was surprised at the size of the gathering, “Until I started over I had the picture, which Frank Carlson gave me last summer, of a small Congressional group of Congressmen and Senators who met on a morning each week. I had an idea of coming over to see 20 or 25 or maybe 50 people. I had no idea that our host has such a party as this. I do hope I may speak for all of you in thanking him for such a breakfast, the like of which I have not had in 10 years. As long as you feed me grits and sausage, everything will be alright.”

In his speech at that first Prayer Breakfast—which was known as the Presidential Prayer Breakfast until 1970—Eisenhower focused on the role of religion in the founding of the U.S. and the continued importance of “deeply felt religious belief.” He said, “Today I think that prayer is just simply necessity, because by prayer I believe we mean an effort to get in touch with the Infinite.”

TIME covered the event the following year, in 1954, when 600 people gathered at the same hotel, and Eisenhower was joined by “the Vice President, the Chief Justice of the United States, Cabinet members, Congressmen, diplomats, businessmen” to, as Carlson put it, “to renew our faith and our commitment to God.”

And, by Eisenhower’s standards and for every president who followed, it proved worth the repeat visit: the “sturdy” breakfast menu included, among other treats, grits and sausage.

Read More about the National Prayer Breakfast Here in the TIME Vault: Breakfast in Washington 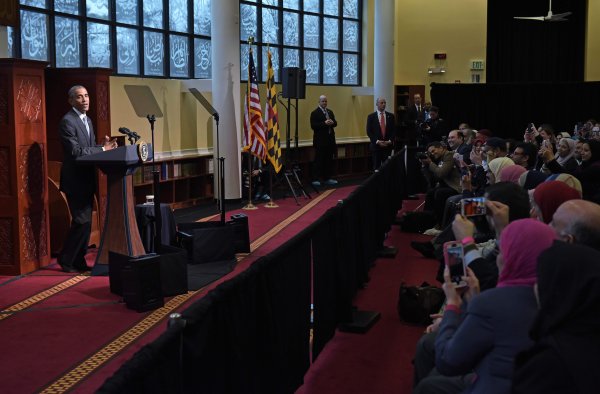 Americans Split Over How Next President Should Talk About Islam
Next Up: Editor's Pick