Another Tragic Photo of a Drowned Child Refugee: ‘What Is Happening in the World?'

Three bodies are washed up on a beach after authorities said at least 37 people were killed when their boat capsized in the Aegean Sea while trying to cross to Greece from Canakkale province, Turkey, Jan. 30, 2016.
Ozan Kose—AFP/Getty Images
By Andrew Katz

He saw the infant first. The boy was face up on a bed of gray and brown rocks, wearing dark pants and a blue top, with “Flying Club” written over an old-model plane. A light blue hat with yellow and white and dark blue stripes, and polka dots, had been placed over his eyes. An orange pacifier attached to his clothes by a yellow chain hanged to the side.

“The first minute, I couldn’t shoot any pictures,” says Ozan Kose, an Agence France-Presse photographer based in Istanbul. “I just looked around, and I was shocked.”

Kose had come across one of the bodies of refugees whose boat had capsized on the shore of the western Çanakkale province before dawn. The Turkish state-run Anadolu Agency reported the vessel had been aiming for the nearby Greek island of Lesbos, as so many had done before it, when coast guard officials said it hit rocks shortly after beginning the journey. At least 75 people were saved, but more than three dozen were killed, raising January’s death toll for the crossing past 100. Last year’s total, per the United Nations, was 272.

A few steps away from the infant, an older boy with dark hair laid in a similar position. He was wearing black and red velcro boots, blue jeans and a life vest. A woman in a dress and headscarf was nearby. Her legs were still in the water, the rest of her body on the rocks. Kose wasn’t certain they were related. Maybe the boys were brothers, he thought. Maybe the woman was their mother.

Soon afterward, Kose heard another body was found on the other side of the beach. There, he saw a boy lying on a flat stone. His light blue life vest was still fastened. He was wearing jeans and royal blue socks with red and green hearts. His left hand was outstretched, the same way a child would grasp a parent’s hand. In the distance was the boat, half of which was submerged.

A capsized boat is seen near the coast of Canakkale province, Turkey, Jan. 31, 2016, after authorities said migrants from Syria, Afghanistan and Myanmar drowned during an attempted crossing to Greece.
Ozan Kose—AFP/Getty Images

Kose, who was on his third day covering the migrant crisis in the Aegean Sea, had been staying at a hotel about an hour and a half away, in Küçükkuyu, when he heard about the tragedy. From his window, he saw ambulances and boats moving about. “I grabbed my cameras and began to run,” he says. A boat had arrived with migrants and refugees, covered in blankets. A second boat belonging to the Turkish coast guard came soon afterward. Soldiers began carrying bodies; he counted 10.

He walked up to a group of people who said they were on the boat. He was told the vessel, which the coast guard told the agency was full of Syrians, Afghans and Burmese, was overloaded. They gave him the location. Rescuers were removing bodies when he arrived; some were still on the rocks or in the water.

When an officer picked up the smallest boy, he placed him carefully in the bag so as not to remove the hat from his face. With the boy in boots, the officer grabbed him by the jeans and gently laid him in a bag opened by a colleague. The boy’s mouth was agape. His eyes were still open, and in Kose’s photographs, the officer can be seen staring into them. The woman was placed in a blue bag and carried away by six men. The boy on the stone, lifted by his jeans and life vest, was placed in a green bag. The officers gave a number to each body they encountered, Kose says. This boy, he heard, was No. 8.

“I couldn’t hold myself together. I couldn’t look at his face,” he said. “I just thought, ‘What is happening in the world?’”

These pictures instantly recall those of Alan Kurdi, the Syrian-Kurdish toddler whose clothed body was found on the Turkish coast in September, startling the international community. The images were widely published and prompted remarks from global leaders to demand a solution to the crisis. Kose says the images rightly drew attention to the issue, but the impact has faded. “I think nothing has changed,” he adds. “I got almost the same pictures.”

Kose has two children: an eight-year-old daughter and a five-month-old son. “Maybe I am so affected because I am a father,” he wonders, attempting to rationalize his response to such a scene. “I just think for a moment, ‘What would I do if this baby was my baby?’” Later that night, he only got three hours of sleep: “If I closed my eyes, I saw them.”

One day earlier, Kose came across hundreds of people who were still planning to cross to Greece after being stopped by authorities. “I told them there are so many accidents: ‘Aren’t you afraid of sinking?’ And people told me, ‘We don’t have a choice. We have to go.’”

Read next: What the Image of Alan Kurdi Says About the Power of Photography 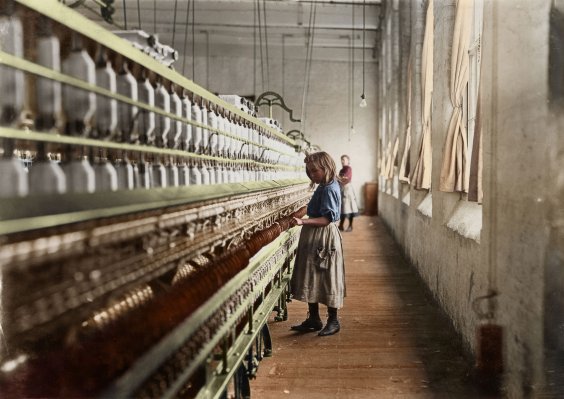 Colorized Photos of Child Laborers Bring Struggles of the Past to Life
Next Up: Editor's Pick