Adriana Cordeiro da Silva, 29, drove five hours from Custódia, Brazil, to bring her 7-month-year-old son Jose Bernardo to get treatment at the Associacao de Assistencia a Crianca Deficiente (AACD), a rehabilitation center for disabled children in the city of Recife. He was born with microcephaly, a rare birth defect causing an unusually small head and incomplete brain development. Cases of microcephaly, which has been linked to the Zika virus outbreak, are skyrocketing in Brazil, topping 4,000 and triggering travel alerts. This center alone has seen 69 children with microcephaly so far.

“[Jose] makes eye contact, but it’s not great,” says Dr. Vanessa Van Der Linden, a neurologist who works at the clinic and has been working with babies with microcephaly since August. “He had a seizure in the office this morning. His mother thought he was just scared. She didn’t know they were seizures. But he also smiles.”

Da Silva’s son was born before everyone in Brazil was talking about Zika. She knew her son’s head was small, but it wasn’t until she started seeing Zika on the news that she decided to take a closer look at his records. The diameter of his head was 32 centimeters, which is considered the upper limit for microcephaly classification. Da Silva also remembered that about a month or so into her pregnancy, she came down with a rash and a fever. That’s when she put two and two together.

“It was hard for me, but I accepted it. I am doing everything possible that I can,” Da Silva says. That includes frequent visits to Recife for specialized care. She’s been traveling to the city three times a week for the last three months. It’s worth the trip, she says, because the specialized care her son needs is not available in her city. “He is everything in my life,” she says.

Jose and Da Silva work with Dr. Cynthia de Melo Silva Ximenes, a physical therapist at the clinic who helps with eye-contact training and strengthening exercises. “The simple exercises can help the baby develop its muscles,” says Dr. Ximenes. She rolls Jose onto his side, and then holds him in a new position.

In another room, Dr. Van Der Linden claps in front of another infant’s face. “It’s to test the reflexes and see if he can hear the sound,” she says. His parents Isabel and Moises Albuquerque have brought him here for examination and physically therapy. Despite the many sonograms she had throughout her pregnancy, Isabel says she didn’t discover her son had microcephaly until he was born. His head circumference was 31 centimeters. She, like many other mothers, also recalls experiencing a rash in the early months of her pregnancy.

“I really want to have him be healthy, so if we have to go to all the specialists the baby needs, we will go,” says Moises. “It’s important to do all these exams right now while he’s young and not wait.”

Doctors don’t know for sure how children with these new cases of microcephaly will progress, and not every child has the same medical problems. Some seem to have more tantrums; others have vision problems. Though the Albuquerques say their son can be highly irritable, he starts smiling and laughing excitedly when his mother holds him.

Doctors are currently recommending babies to see multiple specialists for comprehensive care, which can be a difficult task for families without resources. “Some families travel 10 to 12 hours,” says Dr. Bianca Modelro, a child neurologist at AACD. “This type of care is not available everywhere. 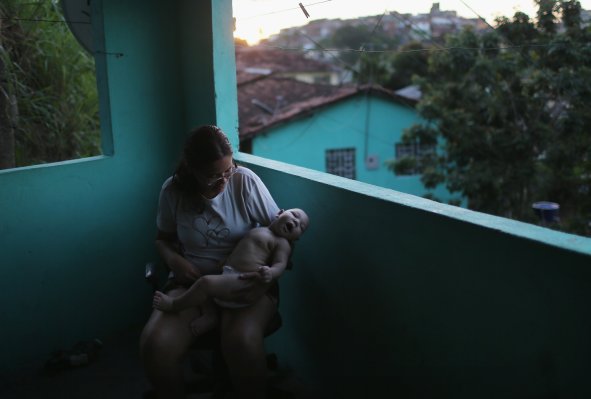 See the Impact of Zika in Brazil
Next Up: Editor's Pick