Everything You Need to Know Before Watching The People v. O.J. Simpson

One of modern history’s most gripping legal dramas will be reexamined when FX’s miniseries The People v. O.J. Simpson: American Crime Story premieres on Tuesday. The show, starring Cuba Gooding Jr. as O.J. Simpson, is based on New Yorker writer Jeffrey Toobin’s 1996 book The Run of His Life: The People v. O.J. Simpson and follows Simpson’s 1994-5 murder trial through its sixteen months. It’s the rare show for which viewers are tuning in not to find out what happens — most will already know — but rather to see a dramatic, Kardashian-laced retelling of the story.

But, if you didn’t follow the case closely — or if you weren’t born when it happened — here’s a reminder of what’s in store. And fair warning: History doesn’t really come with spoilers, but many of the details of the case are revealed below.

Orenthal James Simpson made his mark with athletics while playing running back for the University of Southern California, winning the Heisman Trophy in 1968. O.J. — also known as “Juice” — was drafted by the Buffalo Bills, where he played for nine years before being traded to the San Francisco 49ers. After retiring from the NFL in 1979, Simpson also made a name for himself with small acting gigs and celebrity friends. In 1994, TIME reported that he attended Donald Trump’s paparazzi-heavy wedding to Marla Maples.

Nicole Brown Simpson and O.J., who were 12 years apart, met in 1977 and wed in 1985. The years they were married were peppered with domestic violence accusations and spousal abuse claims from Brown Simpson against her husband. O.J. was eventually sentenced to 120 hours of community service and two year’s probation, fined $200 and ordered to give $500 to a domestic violence shelter for women. The sentencing prompted a statement from the couple, who had two children Sydney and Justin, together. “Our marriage is as strong as the day we were married, if not stronger,” the 1989 statement said. They divorced in 1992.

She and Ronald Goldman—a waiter at a nearby restaurant, who was reportedly bringing her a pair of glasses she’d left behind—were found dead on June 12, 1994.

Police found bloodstains outside the driver-side door of Simpson’s Ford Bronco and later ordered Simpson to turn himself in. On the day he was due to present himself, Robert Kardashian—a lawyer and friend of Simpson’s—released what sounded like a suicide note from O.J., who wrote that he had “nothing to do” with the murder. It was about an hour later that a driver spotted a white Bronco on Interstate 405. It was not the same car in which the blood had been found, but O.J. was inside, being driven by Al Cowlings, a friend and teammate who owned the same car model. The low-speed chase ended in the driveway of Simpson’s Brentwood home, where Simpson and Cowlings were taken into custody. Police found Simpson’s passport and thousands of dollars in Al Cowlings’ Bronco.

The chase had been broadcast on live TV, making the Bronco into an icon of the trial: a collector named Michael Pulwer later purchased it for $75,000—more than twice its original value, according to ESPN—and it become fodder for pop-culture parodies.

According to prosecutor Marcia Clark, who said she must be “convinced 200% that a defendant is guilty” before trying a case, a conviction was a sure thing—but that turned out not to be the case.

When prosecutors presented blood found at the crime scene, the defense—spearheaded by Robert Shapiro alongside Johnnie L. Cochran, Jr., who was well known for his work defending high profile clients—claimed it had been contaminated by police incompetence. There were also claims that the blood was planted by Mark Fuhrman, a detective who had a history of using racist terms.

Prosecutors also presented a disturbing 911 call in which listeners could hear Nicole begging the police for help, as well as records found in a safety deposit box of hers, in which Nicole appeared to have kept track of abuse O.J. allegedly inflicted on her. The defense, however, argued that the log dated to the time of their divorce proceedings and was not relevant to the trial.

A glove that was found at the crime scene was also presented after its mate was found on O.J.’s estate, with both victims’ blood on it, but prosecutor Christopher Darden asked O.J. to try the glove on. It didn’t fit, leading Cochran to say, “If it does not fit, you must acquit.”

The O.J. Simpson trial took place at a time of heightened racial tensions—especially in Los Angeles just a few years after the 1991 beating of Rodney King—and those issues would prove pivotal to the trial as well as to response outside the courtroom. Fuhrman’s alleged racism was part of the defense theory that O.J. might have been framed. By the time the trial drew to a close, it had come to be seen as a symptom of a divided America, and observers’ views on the case were to many a litmus test for a much larger issue.

TIME itself drew criticism for a darkened mugshot of Simpson that was featured on the cover shortly after the car chase. In response, then-editor James R. Gaines, wrote that, “First, it should be said (I wish it went without saying) that no racial implication was intended, by TIME or by the artist. One could argue that it is racist to say that blacker is more sinister, and some African Americans have taken that position in the course of this dispute, but that does not excuse insensitivity. To the extent that this caused offense to anyone, I deeply regret it.”

Judge Lance A. Ito was criticized for his decision to allow cameras in the courtroom during the trial. The coverage was so sensational that three of the top soap operas at the time lost more than 10% of their viewership in 1995, as audiences split for the real-life Simpson drama.

In retrospect, the trial has gained another layer of media meaning: Robert Kardashian, who was on Simpson’s legal team and died in 2003, was the former husband of Kris Jenner, of Keeping Up with the Kardashians fame. Jenner was close with Nicole Brown Simpson—they were supposed to have lunch the day after the murder—and gave her daughter Kendall Jenner the middle name Nicole, in memory of her late friend.

Simpson was later ordered to pay $25 million in punitive damages to the families of Brown Simpson and Goldman after a civil case in 1997. The second verdict was featured on TIME’s cover in February of 1997, but wasn’t Simpson’s last run in with the law. In December of 2008, he was found guilty of 10 charges related to a gunpoint robbery at a Las Vegas hotel. He’s since been serving a sentence at the Lovelock Correctional Center in Nevada and will be up for parole in 2017. 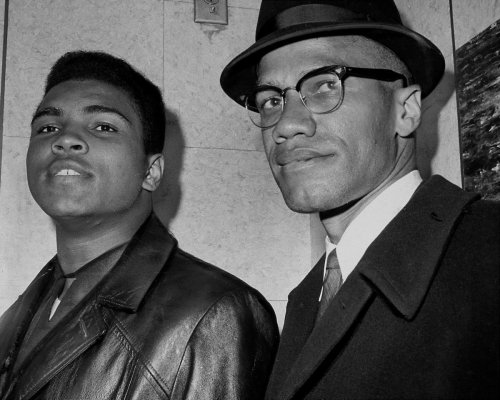 This Is What Happened When Muhammad Ali Met Malcolm X
Next Up: Editor's Pick