Democratic Progressive Party chairperson and presidential candidate Tsai Ing-wen, third from right, celebrates her election victory with other party members at the DPP's headquarters in Taipei on Jan. 16, 2016
Damir Sagolj—Reuters
By Rishi Iyengar

Taiwan’s Democratic Progressive Party created history on Monday, when it officially took charge of the island’s parliament for the first time ever and saw one of its members elected to the post of Speaker.

DPP politician Su Jia-chyuan assumed the leadership of the Legislative Yuan, as the Taiwanese legislature is known, with 74 of 113 votes from his fellow lawmakers, Taiwan’s Central News Agency (CNA) reported.

Su replaced Wang Jin-pyng, a member of the incumbent and hitherto dominant Kuomintang (KMT) party, who had served as Speaker for 17 years.

The DPP, a pro-independence party whose leader Tsai Ing-wen is set to become Taiwan’s next President following a landslide election victory two weeks ago, holds 65 of the 113 parliamentary seats as compared with the KMT, which could only muster 35. 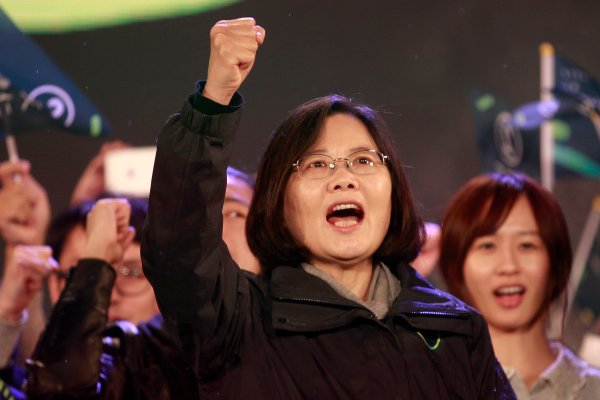