The super PAC supporting New Jersey Governor Chris Christie is blasting rival Ohio Governor John Kasich for his ties to Lehman Brothers, the failed bank that was brought down amid the 2008 financial crisis.

The 30-second ad from America Leads opens with GOP front runner Donald Trump blasting Kasich for his ties to the bank, before an ominous voice-over deepens the cut, suggesting Kasich profited off the bank’s collapse.

“John Kasich voted to give Wall Street banks a blank check to write billions in bad loans leading to the financial crisis,” it states. “Then as a banker at Lehman Brothers, a Wall Street Bank that failed, Kasich made millions while taxpayers were forced to bail out Wall Street.”

Kasich told TIME in 2015 that he had no regrets about his time at the bank, where he served as managing director of the firm’s Columbus, Ohio, office. “It was fantastic. Are you kidding? Regrets? I thought it was a fantastic time,” he said.

The ad is the only negative spot the group is currently planning on airing during the final week of campaigning in New Hampshire, where Christie must perform strongly or see his campaign end. Targeting Kasich is a sign of the Ohio governor’s strength in recent polls as well as the opportunity Christie’s backers see in trying to win over Kasich’s supporters.

The other spots the super PAC is airing are positive, including two 15-second ads highlighting his record as governor, and a 60-second ad featuring Christie re-tell his family’s story from Sept. 11.

Matt David, the strategist for New Day for America, the super PAC supporting Kasich, argued Christie has even stronger ties to Wall Street.

“Governor Christie should either disavow the ad or have the courage to repeat Trump’s attack on Governor Kasich,” he said. “For playing such as tough guy, this shows remarkable weakness.” 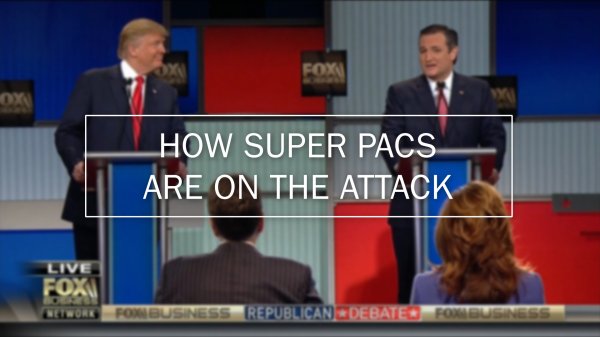 How Super PACs Are on the Attack
Next Up: Editor's Pick