On the eve of the Iowa caucuses, Ted Cruz hammered home his outsider appeal as he made his way across Iowa’s muddy fields, essentially using the fact that few in Washington can stand him as a selling point on Sunday.

“Cruz cannot win because the Washington elites despise him,” he said to cheers, mocking those who doubted his campaign could catch fire. “I kind of thought that was the whole point of the campaign.”

Indeed, Cruz is one of the most unpopular figures inside his Republican conference. It is not overstating the facts to say he has no friends in the Senate. Even in the typically civil Senate, his colleagues routinely criticize him and mock him and his bombast. He has shown them even less respect, often going after his party’s leaders in public spats.

That in-your-face approach has given him support during an election cycle that, so far, has rewarded confrontation. Just look at Trump, who is atop the polls based on his bluster and bullying.

Cruz is doing his own version of that. “Listen, if you think things in Washington are doing great, that we need to keep heading in the same basic direction, just fiddle around the edges and maybe make some deals, I ain’t your guy,” Cruz confessed in a very light swipe at Trump’s business acumen.

Read More: Cruz Limps Toward the Finish Line in Iowa

Cruz has for months built a traditional campaign, with local precinct leaders trained and tasked with turning out strong supporters for Monday’s caucuses. He has bet that evangelicals and conservatives will continue to hold dominance in the caucus process, and that Trump’s supporters will be swayed or, perhaps, skip the voting altogether.

“It’s now or never … stand up, speak for us. If we stand together, we will win,” Cruz said. “This is your time to make the decision for the men and women of Iowa, to say we cannot get fooled again. The stakes are too high. We cannot roll the dice. Look at how we’ve walked.”

At an hour-long preshow, Cruz’s guests promoted him as the most unpopular guy in Washington. “We need someone who will stand up for what’s right, not to be liked,” said his wife Heidi.

As part of a half-hour introduction, media personality Glenn Beck heaped praise on Trump between lectures on the Founding Fathers. But he took the chance to criticize Trump in a way Cruz has set aside. “There is one who is not a good guy,” Beck said ominously. Trump promises that he alone can change the country. “No man can do that. It’s ‘We the people,’” Beck said.

Cruz’s challenge now? Make sure enough of those people decide to show up on Monday, liking him and the fact no one back in Washington does. 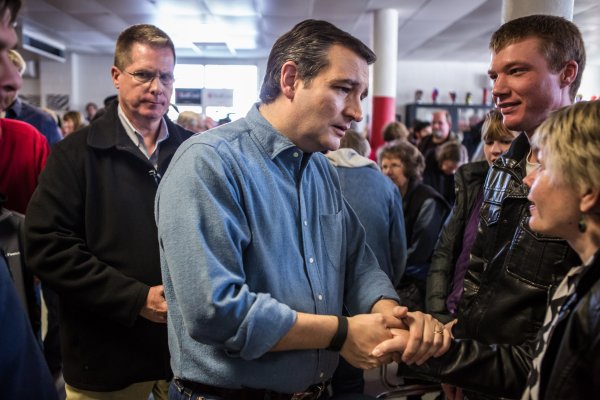 This Is How Ted Cruz Plans to Win in Iowa
Next Up: Editor's Pick