#Cancel Your Outrage: Stephen Colbert Is Not a Racist

On Wednesday’s Report, Stephen Colbert’s idiot-pundit character gave a “defense” of Dan Snyder, the Washington Redskins owner who has bitterly clung to the team’s racist nickname. Citing Snyder’s hamhanded attempts at p.r. spin–trying to buy goodwill for the name with a “foundation” and some token donations to Native Americans–Colbert referenced his own show’s racist “mascot,” a Chinese caricature named Ching-Chong Ding-Dong, who the show introduced in 2005 in a meta-skit about the fictional Colbert trying to excuse his own racism. Mimicking Snyder, Colbert offered to make amends “by introducing the Ching-Chong Ding-Dong Foundation for Sensitivity to Orientals or Whatever.” (You can watch the whole thing online.)

Thursday, the Comedy Central account–run by the channel, not Colbert or the show’s staff–sent a tweet consisting essentially of just that line. As a punchline to an extended, constructed bit, it was a searing sendup of Snyder’s creating “the Washington Redskins Original Americans Foundation” (because, Colbert said, “Redskins is not offensive if you only use it once in your name”). As an individual tweet, it just looked like a non sequitur racist slur from a famous person to about a million followers.

There are a couple ways to react to this kind of situation:

(1) Man, that tweet was really… bad. Stephen Colbert always seemed decent. Is he really an insensitive, raging racist? Is there some kind of explanation for this? Could someone have made a well-intentioned mistake here?

So once again we went from zero to I Demand Someone’s Head in no time flat. In short order, the hashtag #CancelColbert was trending on Twitter. That’s right. Nine years of brilliant satire demolishing hypocrisy and injustice? Eh, fine. Five seconds of reading a tweet? CANCEL!

Because what else did you need to know? What context did you need? The tweet was right there! Somebody retweeted it! People whose reactions I trust about this sort of thing are angry! It’s not my job to do further research! Stephen Colbert, I declare you #Guilty!

Maybe there are people out there who would argue that the full skit itself was racist–that, in fact, one can never create satirical racism to lampoon actual racism, because the wrong people might take the wrong pleasure from it for the wrong reasons. I would probably disagree with you, but I’d gladly read the argument–it’s a version of the arguments that people have made against Archie Bunker and George Jefferson and Eric Cartman and Borat. Satire is not its own defense; it can be badly executed, or it can be an excuse for actual hate. And if you want to make that argument about Colbert, go ahead, though I’d say you’ve got nine years of his show arguing against you.

But really this goes beyond Stephen Colbert or even racism. It’s about the instantaneous urge now to react fastest and most righteously, to Pick a Damn Side Already and demand the greatest punishment, to always, no matter what, immediately assume the worst of somebody who crosses you the wrong way. Sometimes it’s about a comedian, sometimes it’s about a politician or TV news host blurting something, sometimes it’s the gasoline-fueled flame war over a hot-button nontroversy like the Elan-Diane airplane war that turned out to be fake.

There is simply no prize for taking the most time to consider, posting the most even-handed and nuanced reaction, demanding the most proportionate punishment. If I’m being honest, this post itself is proof of that. No news site is going to get a billion clicks rushing out the headline: Internet User Considers Facts, Decides Tweet Was Maybe In Poor Judgment But With Extenuating Circumstances.

That’s just the media world we live in. Maybe someone like Stephen Colbert could do a late-night satire on it. And if he does, let me be the first to demand, in advance, that he be #Fired. 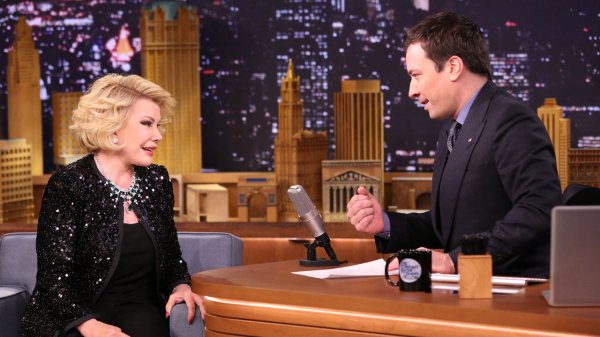 VIDEO: Joan Rivers Returns to Tonight Show for First Interview in 26 Years
Next Up: Editor's Pick