Why Republicans Keep Promising Not to Embarrass Iowa Voters

Just days before the caucuses, two candidates have been making a new pledge to Iowa voters: you won’t be embarrassed to have voted for me.

The refrain from New Jersey Governor Chris Christie and Florida Senator Marco Rubio is always delivered in their parting message to voters. It can be read as a rebuke to the rise of the bombastic and sometimes offensive Republican front runner, Donald Trump. But advisers say the promise has a broader meaning than Trump. It is also a catchall reference to uncomfortable panders, political scandals and foreign policy misadventures, from the Monica Lewinsky scandal to the Iraq War.

“We need to pick a Commander in Chief who will make us proud of the vote we made, who will not embarrass us, who will not make us feel less than what we are and what we have always been,” Christie told a crowd of more than 250, many munching on nachos or sipping Bloody Mary cocktails at the Chrome Horse sports bar in Cedar Rapids. “Here’s what I promise you: I’ll never embarrass you. I’ll never make you feel ashamed of the vote you made, and I will never forget my first and most important job when I wake up in that White House, and that is to protect the safety and security of the American people.”

Barely 24 hours earlier, Rubio was making the same commitment as he wrapped up a town hall in Clinton, Iowa, on the banks of the Mississippi River. “I will always work to make you proud,” he told the midday Friday crowd of about 100. “I do that now, by the way. When I’m on the debate stage, when I stand there every night at these debates, when I go out on the road, when I talk to the press, one of the things that’s always on my mind is, I have people that support me, I have people that put their name next to mine. I have people out there knocking on doors and making phone calls and campaigning for me on Facebook and Twitter. I never want to do anything that embarrasses them. They don’t have to agree with me on everything. But I will never embarrass you. I will never do anything that makes you cringe, and say, ‘Ugh, I can’t believe I supported him, and I can’t believe that’s who we picked.’”

Of course, neither candidate is breaking ground with the promise. In recent years, it has become something of a tradition for Republican candidates. Mitt Romney promised the same to voters in 2012, and Rick Perry made the same pledge a year prior to conservative pastors.

“What we need in leadership is individuals who will tell the truth and will live with integrity,” Romney said in March 2012. “I will not embarrass you in the White House.” 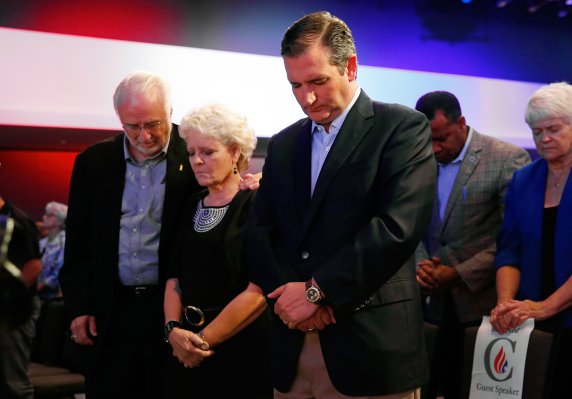 Why Ted Cruz Has a Chance of Winning the Republican Nomination
Next Up: Editor's Pick