Hillary Clinton Calm and Confident In Closing Days of Iowa

Mary Jo Peterson isn’t worried. “I think Hillary is going to be the best president we’ve ever had,” she says, calmly surveilling a crowd of about 1,500 in Davenport for Bill and Hillary Clinton Friday night.

Peterson, a 53-year-old teacher from Grand Mount, first got involved in politics in 2007 for Clinton’s first presidential bid. Before those caucuses she worked her heart out—as did the whole campaign—in a frantic belated push to counter a surging Barack Obama. When Clinton placed third in Iowa, Peterson was crushed. But this time, she says, she’s a lot more confident.

In recent weeks, Clinton has battled a flurry of headlines declaring her “panicked” at rival Bernie Sander’s surge in polls and fundraising. Clinton is “racing to close the enthusiasm gap,” while her polls numbers are in “an absolute free fall,” and “Sanders’ surge threatens a replay of 2008 for Clinton.” But the reality on the ground doesn’t bear this out.

Read More: Follow Clinton and Sanders Supporters as They Knock on Doors in New Hampshire

The Davenport rally, essentially Clinton’s closing argument to Iowa’s eastern Quad Cities, was one of the largest crowds Clinton has addressed by design. As Clinton makes her way across the Hawkeye State ahead of Monday’s caucuses, her events—as well as her husband’s—are by design smaller and more intimate. There are no desperate recriminations, just a calm outline of the differences between Clinton and her rival Vermont Sen. Bernie Sanders. She is so on message that her events hardly vary in structure and tone. Her husband’s events are so quiet—a retelling of how he met his wife and how she has over the years been a force of good in his life and, he argues, the world—that the New York Times declared “the magic seems to be missing” and quoted political observers worried about his health.

What’s missing, actually, is the panic. The final month before the 2008 Iowa caucuses was a long, chaotic freak out. Hillary Clinton raced across the state addressing massive crowds. Her message was all over the place. One week she was military Hillary campaigning with former generals; the next she was mommy Hillary stumping with her mother and daughter. Bill Clinton poured on his famous charm—and forked tongue—so much that the press openly wondered if he was the one actually running for president. His performance grew so unhinged that later journalists speculated he might have been suffering from “pump head” associated with his quadruple bypass.

Back then, Clinton was blindsided by Obama’s surge and the resulting panic prompted her campaign manager, Patti Solis Doyle and hundreds of her headquarters staffers to flood the state in a last ditch effort to approximate Obama’s sprawling ground game. Clinton had spent much of 2007 as the “inevitable” candidate, eschewing retail politics for an expensive paid media campaign. It also prompted a round of harsh attacks by Clinton against Obama that backfired.

This time around, Clinton has done the opposite. She adopted Obama’s strategy, and hired much of his team, to build her a massive grassroots organization essential in a state with 1,682 caucuses. The word “inevitable” was long ago banned from her campaign and their unofficial mantra is they work for every single vote. Her campaign motto went from “Ready From Day One,” to “Fighting For You.” And her crowds went from massive to relatively tiny—maybe 150-200 people in most places. She wanted to give Iowans an intimate feeling, says one campaign staffer. She wanted them to see that she’s listening to them, and not vice versa, a fact that is clearly reflected in her final Iowa campaign ad, which offers an emotional thank you to the people of Iowa.

Obama basically caught Clinton by surprise in 2008, but this year Clinton has been aware of Sanders’ threat for months. He was gaining on her in the spring before her Benghazi hearing and debate performances helped her keep the lead. That has allowed the campaign to deploy a far more measured response. In responding to Sanders, Clinton has tried to delineate differences without becoming too negative or personal.

But perhaps the biggest difference is her message. Back in 2008, there wasn’t much of an overarching message beyond: I’m capable of being president—typically the first message of a female candidate running for executive office. This time, the campaign is highlighting the historic nature of her candidacy and nakedly appealing to women. But even beyond that, Clinton’s own wonky dissections of Sanders’ policies are purely hers. She’s not trying on any outfits—military Hillary, mommy Hillary—she’s just Hillary.

Read more: The Tale of Two Democratic Rallies in Dubuque

“It does feel different this time,” Peterson says. “Women are much more aware. They want a female president and they know Hillary is their best shot.” While Peterson believes Clinton will win Iowa, she isn’t worried if she doesn’t. “She has the best shot, she’ll win the nomination,” she says.

Of course, all of this could be read another way. Clinton’s small crowds are indicative of weak support. Her lack of attacks and her husband’s dulcet tones could indicate a lack of passion and energy. But Peterson argues that if energy is the problem, losing would be one way to solve that.

Back in 2008, Peterson redoubled her efforts after Clinton’s Iowa loss. When asked if she became a PUMA—a movement of women called People United Means Action or, more often, Party Unity My Ass, that were livid that Obama robbed them of the first female nominee—Peterson blushes and mumbles, “Not really.”

But she does latch on to the idea. “If Hillary were to lose Iowa, it would spur me to work even harder for her,” she says. “And I know a ton of women who feel the same way. A lot more than last time. It would be like PUMAs times 1,000.” 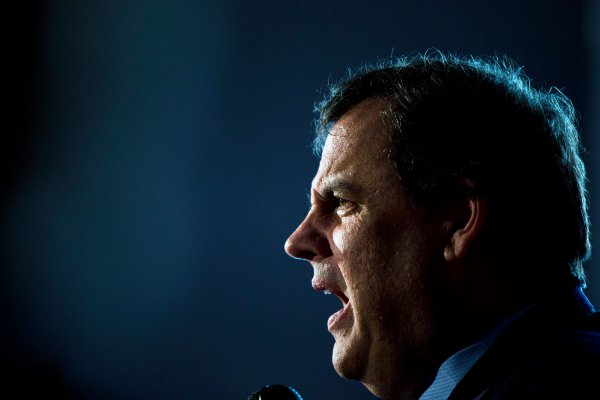 Iowa Governor Terry Branstad To Appear With Chris Christie At Final Rally
Next Up: Editor's Pick