A Tale of Two Democratic Rallies

Hillary Clinton and Bernie Sanders both touched down for rallies in Dubuque on Friday afternoon, circling each other like wary boxers before a round.

They held events at different times and were likely not in the city at the same time. Each rally was characteristic of its candidate. Clinton gave a highly detailed policy speech, attacked Republicans repeatedly and tied herself close to President Obama’s records. Sanders delivered a stemwinder on the progress America has made and outlined his moral indignation on wealth inequality, corporate influence and expensive colleges.

Even while the candidates’ aides bicker on the sidelines, Clinton and Sanders have both largely avoided hammering each other in speeches, signaling a break in tone from the last couple weeks when Sanders criticized Clinton for taking Goldman Sachs’ cash and Clinton suggested Sanders would make a feckless president. Their criticisms of one another were subtle and tame, with just days before the Iowa caucuses.

Below are many of the aspects of what the candidates did on Friday, each chosen to reveal something about the candidate’s starategy or message.

Read More: Follow Clinton and Sanders Supporters as They Knock on Doors in New Hampshire

Clinton: None
Sanders: “Feel the Bern!”

Clinton: “When President Obama was elected, he called me to Chicago, I didn’t know why but it was because he wanted me to be Secretary of State. But before that, he looked at me and said, ‘It is so much worse than they told us … He inherited that … We made progress!”
Sanders: Praise of his election as first black president.

Clinton: “You guys have been the best possible sounding boards.”
Sanders: “Eight years ago just at this time almost today, a candidate came to a virtually all state and that candidate ran for president of the United States based on his ideas. Obama came in to the state of Iowa, virtually all-white state … he won here you helped make him president … What Iowa showed the world is that the people of this state were prepared to vote for candidate based on his ideas, and not his race.”

Clinton: “When we have a Democrat in the White House the economy does better. I know the last two Democratic presidents we’ve had … [My husband] got to work and he added it up and we ended up with 23 million new jobs and that wasn’t the best of it: incomes went up for everybody
Sanders: None.

Clinton: “Gosh, [In 2000] we went off and we elected another Republicans—no, the Supreme Court went out and elected a Republican!”
Sanders: “If we were in this room 10 years ago, and somebody said, ‘I think in the year 2015, gay couples will have the right to marry in 50 states in this country,’ somebody would look up and say, “What are you smoking?”
[Applause. Long pause.]
“Which actually raises another issue!”

Clinton: “Before it was Obamacare, it was Hillary-care.”
Sanders: “Nobdoy in America knew who I was, that was a problem.”

Clinton: Johnson Controls company, which recently moved overseas, “can pretend they’re now a European company so they can avoid paying taxes to the United States government which saved them in 2008! That is absolutely un-American. That is wrong. This is one of those tax gimmicks they call an “IN-version.” Honestly, it should be called a ‘PER-version.'”
Sanders: “Not one executive on Wall Street ever been prosecuted…. Together, you and I are going to restore faith and bring justice to the criminal justice system. No matter how high and matter no matter how rich and powerful, if somebody breaks the law, they’re gonna pay for it.”

Not-So-Subtle attack against the other

Clinton: “I’d rather under-promise and over-deliver.”
Sanders: “We do not represent the billionaire class, the drug companies, Wall Street, we don’t want their money and we are not going to have a super PAC. I am the only Democratic candidate for president who does not have a super PAC, who does not go to the wallets of investment bankers in order to raise campaign funds.”

Clinton: The vigorous yet controlled point.
Sanders: Right arm extended perpendicular to the body, thumb and two fingers held together chopstick-style, tapping rapidly on the air.

Clinton: “How anyone can even think of going with anybody else doesn’t make any sense. Bernie is good, but Hillary has so much more experience.” — Carma Homjak, Dubuque
Sanders: “Hillary personifies the corporate establishment. She’s a shill for Wall Street. A person like Bernie, people like him because he’s not bought and paid-for.” — Julius Sheppard 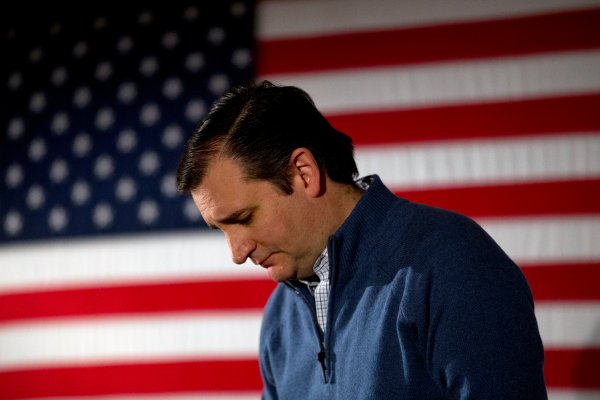 Cruz Limps to Iowa Finish Line
Next Up: Editor's Pick