How FDR Would Have Defeated Trump

Random House
Ideas
By Jonathan Darman
Jonathan Darman is the author of Landslide: LBJ and Ronald Reagan at the Dawn of a New America.

Every so often you can catch it in their eyes. Standing on a stage, overshadowed by Donald Trump, his polished, plastic primary opponents break into self-pity. It’s all so undignified, to start out running for the presidency and end up on a bad reality show. In their youth, studying presidential greatness, they dreamed noble dreams: That is going to be me! But this tawdry enterprise, this thankless chasing after a narcissist who speaks nonsense and spews hate, is this really the calling of Thomas Jefferson and Abraham Lincoln? Think of Franklin D. Roosevelt. What if he had had to waste his time dealing with “gollums“ like Trump?

As it happens, though, FDR did face foes who were just as clownish, reckless and popular as Trump, and while they didn’t directly compete with him for the presidency, their lust for mass-adulation presented American democracy with a far more dire threat. FDR triumphed over these menaces, not because he lived in a nobler age but because he excelled in the one thing that has so far flummoxed Trump’s challengers: the shrewd and merciless application of political skill.

At times, watching the Trump candidacy, the dark politics of the 1930s feel disturbingly near. In his subtle stoking of racial prejudice, his unsubtle appeals to religious fear and his gleeful frenzying of mobs, Trump can seem the heir to the Depression-era demagogues. We laugh at Trump’s infatuation with his own popularity and marvel at his ability to say or do anything, but men like Father Charles Coughlin and “Kingfish” Huey Long would have recognized his game.

Coughlin, a radio priest whose rabidly anti-Semitic broadcast outdrew “Amos ’n’ Andy” in the mid 1930s, noted that he received far more adoring letters than Roosevelt each week and bragged constantly about his millions of followers. Standing before Trump-sized audiences decrying “Franklin Double-Crossing Roosevelt” (whom he called the “anti-God” author of the “Jew Deal”), he would rip off his Roman collar and continue speaking in only his undershirt. Like Trump, he knew that as long as your audience is with you, you can act as crazy as you like.

Long, a governor and then senator from Louisiana who ruled autocratically as the “Kingfish” baldly threatened the establishment in terms that would make Trump sound like the great conciliator. “Men, it will not be long until there will be a mob assembling here to hang senators,” he told his colleagues in Washington. “I have to determine whether I will stay and be hung with you, or go out and lead the mob.”

Yet while Long and Coughlin and other flamboyant Roosevelt critics like Charles Lindbergh in his ugliest “America First” days speak to the frightening possibilities of Trumpism, their story should be cause for hope, not despair. After all, for all their appeals to the nation’s worst angels, the demagogues of the Roosevelt-era did not succeed in their efforts to upend the political order. They failed in part because their nasty tactics were met by FDR, a president who understood that, when used correctly, simple principles of good politics will bring down even the most effective demagogues.

The playbook FDR used to triumph in a time of hucksters, showmen and wild outsider rage still works. Yes, we’re a long way removed from newsreels and Fireside Chats, but his rules of attack are broad and flexible enough to keep up with the churn of any age. If so inclined, Trump’s opponents could use these rules to bring the Donald down.

1. You have to be an entertainer, too. Responding to Trump’s latest provocation, his opponents usually shrug and say something like: “He’s an entertainer.” They’re offering an excuse: it’s unfair to expected them to compete with Trump’s showman skills. FDR never would have ceded that ground. He understood that, no matter who his opponent, a politician is a performer, too.

FDR was, of course, a natural, but he also worked hard to understand his culture—as president he pored over six newspapers a day and read many of the thousands of letters Americans wrote to him each week. He saw he was living in a uniquely talk-filled time — the golden age of radio, the first days of sound at the movies, the era of blaring tabloid headlines that felt like someone shouting in your face. He held rollicking news conferences so that reporters would have his voice ringing in their ears when they went to write their stories. And what a voice it was, as the country learned in the Fireside Chats. Critics like Coughlin tried to use the radio to attack him, but their attacks strained credibility with ordinary Americans who, in their heads, could already hear what FDR would sound like in response.

2. Attack, but on your own time. Trump has controlled the campaign through a simple formula: provide a daily provocation and the other candidates will spend all their time figuring out how to respond. Roosevelt wouldn’t have taken Trump’s bait. As he prepared for re-election in 1936, his advisers fretted over the roaring vitriol coming towards him from the Republican press and from radical critics like Coughlin. He had to respond, they told him, right away. But Roosevelt resisted, understanding that joining their fight would only draw attention to him from the worst angle. If, however, he left his opponents alone with their rage, they would eventually reveal themselves as hacks. A Trump opponent who left the Donald to talk with himself could reveal Trump’s great weakness: he jumps at every shift in public mood, heedless of where public opinion will ultimately end up.

3. Run against the establishment, whoever you are. In an angry election year, Trump’s opponents have let him (along with Ted Cruz and Ben Carson) claim the anti-establishment label, perhaps afraid that they themselves can’t pull it off. FDR proved that anyone can run as anti-establishment, as long as they do it with sufficient conviction. It’s hard to imagine a bigger insider than the FDR who ran for re-election in 1936—the cousin of a former president, he himself had been president for four years in which his party had commanded huge majorities in Congress. Yet Roosevelt ran that year as the candidate of insurgent change, crusading for the common man. Co-opting the anger of his radical critics, he told the American people he was running against the entrenched interests—the “economic royalists”—who feared his movement because “we seek to take away their power.” The country bought it—FDR won all but two states that year.

4. Find a way to have fun, or get out of the race. Trump is the only candidate (with the exception of Bernie Sanders) who looks like he’s having any fun. FDR knew that people will only follow you if you look like you’re having a blast. In the White House, he made constant, stagey efforts to show just how much enjoyed being president, and people responded in turn.

So come on, all you would-be Trump slayers, wipe that sad look off your face. Yes, Trump is a bully. But think about all the pressures FDR was under in his presidential campaigns: an economy in extremis, a collapsing global order, a physical infirmity that made simple moving around an ordeal. Yet if he were on the stage next to Trump, his face would be filled not with sorrow but with joy. The joy of a master about to a put a crude pretender in his place. 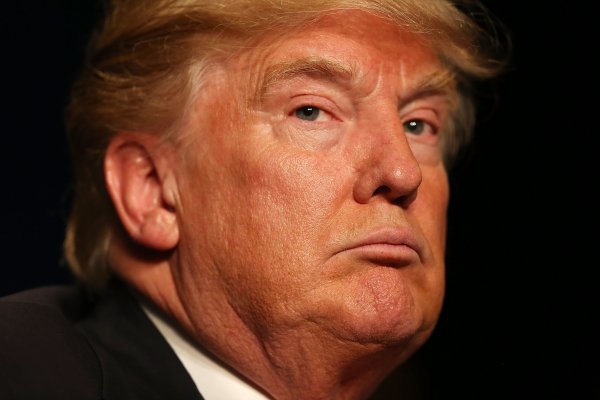 Trump Hits Cruz on Ethanol in Final Pitch to Iowans
Next Up: Editor's Pick