Milk Bar Owner Christina Tosi: What Failing on a Regular Basis Has Taught Me

Failure gets a bad rap, but I’d like to change that. Failure is necessary. Let it in. Chew it up, and use it as fuel for your soul. It’s your power bar for the day.

I use the word “failure” not to be a harsh critic but to categorize the pursuit of taking some risks, taking some missteps, then digesting them and understanding what you want to do with them. It’s that strength of the human spirit, the strength of what’s deep down in you, that’s really going to get you anywhere and everywhere.

My first season of MasterChef was tricky. I took a risk going into TV. I was confident it was the right risk and confident I’d break down barriers as the first female judge—and one that was previously only known for the sweeter side of the kitchen. But I had no idea how hard it would be! I agreed to wear too much makeup and squeeze into dresses that just weren’t my jam. All as part of the “trying things on for size” process with the network, producers and more. I didn’t know who TV me was, and neither did they. We struggled to find me in it, to find and celebrate my voice. But we were determined.

I embraced the fact that introducing myself to a whole new world of people in a whole new light could only happen if I took risks, embraced the daily failures and jumped right back up until we found a groove that celebrated the incredible vision of the show while also embracing my personality and style.

Now, when I say you need to learn how to embrace failure, I don’t mean hiding under the covers and feeling bad about yourself. I mean saying, “OH! Hello failure. You’re here again, huh? O.K., well welcome. But don’t get comfortable. You can’t stay for long (hope you don’t mind!). How can I get you happy and healthy and send you on your way? How can I get you out the door just as swiftly as you came? Wanna take our ‘beef’ to a good friend or trusted mentor and see if we can iron things out? Got any good jokes? Is it deeper than that? O.K., well maybe just a PJ party to roll things over, but then you gots to go tomorrow first thing, K?” I think that’s when you’re really in control of the situation. You can’t control whether you succeed or fail, but you can control how you deal with it.

At work in general, as a female and as an entrepreneur, you will be told, persuaded and sold many things. You’ll be seen as green. You’ll be underestimated and undermined. Which is why it’s also important to embrace others’ failures to understand you and to accurately estimate what you bring to the table.

As a boss, as a CEO, as a creative director, as a chef, I’ve learned that failure will always come. I’ve learned to give it a big squeeze, smile at it, humble myself to it and then use it as a springboard to send me on my way to strength, success and fulfillment. After all, hard bodies never say die.

Christina Tosi is the chef, founder and owner of Milk Bar, as well as a judge on MasterChef. 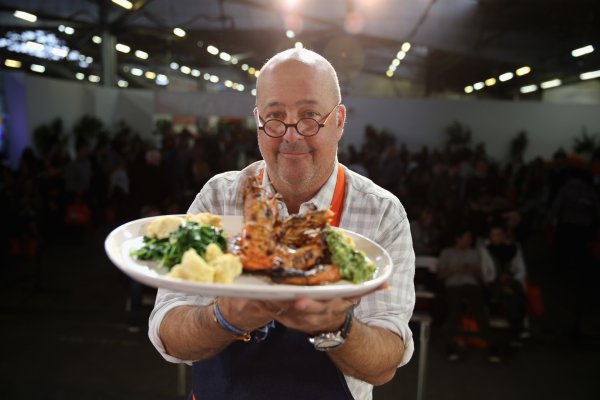 Andrew Zimmern Explains How to Acquire a Taste
Next Up: Editor's Pick