Generally considered offensive, the term “anchor baby” refers to children who are born in the United States to parents who are not U.S. citizens. Trump appears to be using the term to insinuate that Cruz could have become a Canadian citizen. (In 2014, Cruz renounced his Canadian citizenship only months after learning that he qualified.)

Trump added that Cruz got “pummeled last night” at the Republican debate. He admitted Friday that his decision to skip the debate was risky, but ultimately concluded that he had made the right choice.

Though he was absent last night, Trump was on the mind’s of the candidates and viewers. The billionaire hosted his own event across town, but was central to the narrative of Thursday’s debat Trump was mentioned constantly last night. 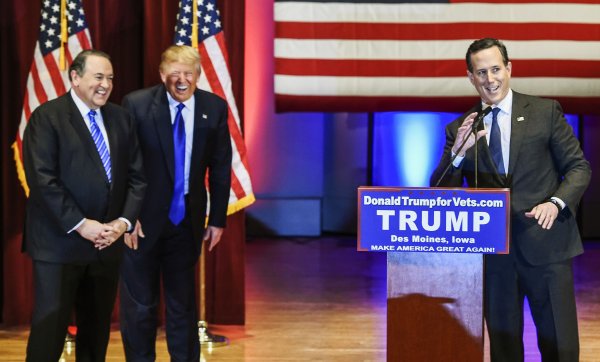 Donald Trump Doesn't Win in Cheap Seats at Rally
Next Up: Editor's Pick