What I've Learned Rescuing Migrants in the Mediterranean

Turkish coast guards pull a refugee boat into a Turkish Coast Guard ship during a rescue operation for the asylum seeker refugees who were illegally trying to reach Greece through the Aegean Sea with a overloaded inflatable boat, on the shores of Turkey's Izmir Province's Cesme District on Jan. 21, 2016.
Anadolu Agency‚Getty Images
Ideas
By Christopher Catrambone
Christopher Catrambone is the cofounder of Migrant Offshore Aid Station and the head of the Tangiers Group based in Malta.

At least 300 children have died or gone missing while trying to cross the Mediterranean since the body of 3-year-old Alan Kurdi was found washed up on the shores of a beach resort in Turkey last September. Many more adults have died in the same unnecessary way. It’s not that their lives don’t matter as much, but the children’s death toll makes it so much more difficult to digest.

The picture of that little boy’s limp body lying facedown galvanized the globe, and politicians followed suit with pledges to have in place a fair, humane and united response to the crisis. Alan’s death and that of his 5-year-old brother Galip, would be made to matter, went the refrain.

Unfortunately, for many of us who have been following closely Europe’s migration crisis for some years, none of this was new. Similar pledges were made and forgotten in the past, and this last episode is no exception. Now that public opinion has thawed from the positive and welcoming euphoria seen over the summer, deaths do not grab the headlines as much, and politicians can forget their promises once again.

And the cycle goes on. Another big tragedy, like the one that took place on Thursday off the Greek island of Samos, and the world remembers again. At the time of writing, 26 bodies were recovered—including 10 children—and 10 more people were missing. Only 24 hours earlier, rescuers were recovering six bodies off the island of Kos, about 170 kilometers (106 miles) south of Samos.

It’s a reality that our crew with the Migrant Offshore Aid Station, an organization that provides search and rescue, faces week in, week out since we launched our rescue operation in the Aegean at the end of December—thanks to a heartening surge of public support after the death of the Kurdi brothers.

Our 51-meter (167-foot) rescue ship operates in one of the deadliest spots between Samos and Kos, off an island called Agathonisi. We didn’t think it was possible, but what we witnessed so far is more dreadful than what we experienced in the central Mediterranean, off the coast of Libya.

Because of the shorter distances, smugglers take greater risks, giving refugees useless lifejackets and putting them on boats that simply aren’t fit for purpose. What’s more, to avoid an ongoing Turkish crackdown on human smuggling, they are seeking ever riskier routes to avoid detection.

It’s a tragic situation, which, you would think, would prompt leaders to come up with that fair and humane plan they had promised to bring order to this mess. What we’re seeing instead is a divided Europe, with states busy finger-pointing and making themselves unattractive to refugees.

Last week Austria triggered a domino effect announcing plans to cap the numbers allowed in. Sweden already stepped up border controls, and Germany is thinking of pulling out of the Schengen area for two years—a decision that might deal a fatal blow to the Europe’s cherished visa-free travel zone.

Then we heard of Denmark’s plan to seize migrants’ assets beyond $1,450 and lengthen the time it takes for refugees to unite with their families.

If this still left you in doubt, the panic-stricken mood was crystallized when Greece was threatened it might be kicked out of the free movement area for failing to adequately deal with the biggest refugee crisis since World War II while in the throes of a crippling financial crisis.

The truth is that the blame game will lead to nothing. Our experience in the Aegean has opened our eyes to just how challenging the situation is for the Greeks. Of course there may be some shortcomings, but for the large part, this small European state was left to fend for itself.

And this is the nub of the question, just as Europe pledged after the picture of Alan Kurdi shook the world, it needs to come together as one, and accept the fact that masses of people fleeing conflict and poverty will be the status quo for years to come.

On the basis of that, it can start putting in place measures to manage the situation rather than firefight it. Offering safe and legal passage to a meaningful number of asylum seekers would be a way to start. That would help organize the flow of people and dissuade many from trusting their lives to smugglers.

Humanitarian visas will also give the bloc better control and opportunity to carry out the necessary security checks to address the legitimate concerns that the Paris attacks have raised. The boats probably won’t stop completely, but their numbers will subside, and with that, deaths, too, will decrease.

Europe has the capacity, the resources, and ability to do this, but its response has been a pendulum that swings from human decency and commitment to its international legal obligations, to hard-line measures that pander to people’s fear and prejudice. That pendulum must be stopped both in the interests of the security concerns that fuel fear and the rising number of people still dying on on Europe’s doorstep. 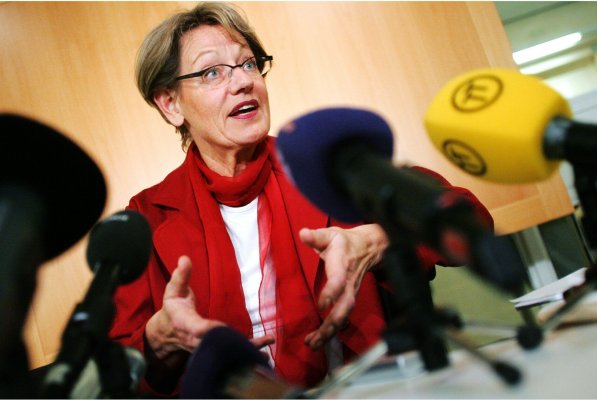 In Sweden, Feminists Grapple With Racism Against Migrants and Gender Equality
Next Up: Editor's Pick