Sen. Marco Rubio of Florida used the final debate before the Iowa caucus as an opportunity to appeal directly to the Hawkeye State’s Christian voters.

Though Republican presidential candidates Donald Trump and Ted Cruz have captured the attention of the state’s conservative Christians, Rubio showed made a point to tout his personal religious views throughout Thursday night’s debate.

When asked to explain how is trailing Donald Trump in the polls despite being hailed as the “Republican savior” by TIME Magazine, Rubio cited a savior he feels trumps them all.

Read More: Why Trump Is Winning Over Christian Conservatives

“Let me be clear about one thing, there’s only one savior and it’s not me,” he said. “It’s Jesus Christ who came down to Earth and died for our sins.”

At one point in the evening, Rubio said “Judeo-Christian values” are what makes America a “special country.”

“Why are we some of the most generous people in the world? Why do American contribute millions of dollars to charity? It is not because of the tax write off,” Rubio said. “It is because in this nation we are influenced by Judeo-Christian values that teach us to care for the less fortunate, to reach out to the needy, to love our neighbor.”

“You should hope that our next president is somebody who is influenced by their faith,” the Florida Senator said before saying his faith would drive him as commander-in-chief.

During his closing statements, Rubio brought it back to the Bible.

“The Bible commands us to let our light shine on the world,” he said. “For over 200 years, America’s light has been shining on the world and the world has never been the same again. But now, that light is dimming a little, after seven years of Barack Obama. And that’s why Monday night, what will happen here in Iowa is so important.”

Thanks to Rubio, faith had a major moment at Thursday night’s Republican debate which occurred just days before the Iowa caucus where nearly 60% of caucus-goers in 2012 identified as born-again or evangelical Christians.

Several other candidates approached the concept of faith throughout the debate, particularly when the moderators posed questions on social issues.

“I think we become unmoored and I think without the religious foundation that guides us all, I think we have a great risk of going horribly in the wrong direction,” he said.

Ohio Gov. John Kasich, meantime, made religious references when touting his record on treating the mentally ill and those addicted to drugs.

“When I study Scripture, I know that people who live in the shadows need to have a chance,” he said. “The time has come to stop ignoring the mentally ill in this country and begin to treat them and get them on their feet.”

And Gov. Chris Christie made a religious liberty argument when talking about the need to fight “the radical Islamic jihadists.”

“The reason why this war against them is so important is that very basis of religious liberty,” Christie said. “As commander-in-chief, I will take on ISIS not just because it keeps us safe but because it allows us to absolutely conduct our religious affairs the way we want to in our heart and in our souls.” 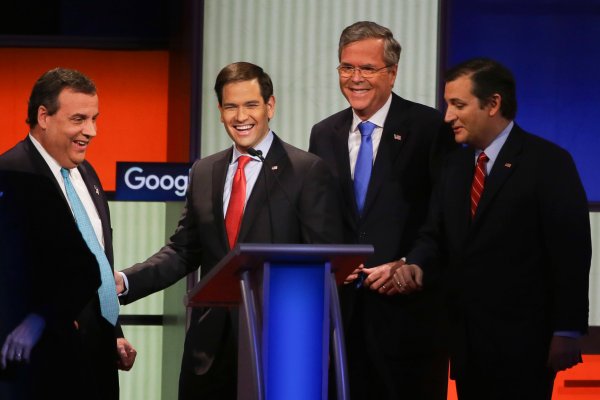 Everything Changes in Debate Without Trump
Next Up: Editor's Pick