You're the Worst's Kether Donohue On Why Grease: Live Will Be 'Epic'

You're the Worst actor stars as Jan in Fox's Grease: Live, which airs this Sunday, Jan. 31 at 7 p.m. EST.
Maarten de Boer—Getty
By Nolan Feeney

Kether Donohue is officially a Pink Lady now. Though Fox announced that the You’re the Worst actor would be playing Jan in a live TV version of Grease way back in September, it was only in mid-January that the character’s iconic pink jacket was complete. “Everything is just coming together so beautifully and it’s really magical,” Donohue says of Grease: Live, which airs this Sunday at 7 p.m. ET. “I feel like I’m at summer camp.”

The truth is, Donohue’s been preparing for her stint at Rydell High for years: she played Frenchie in her eighth-grade production of Grease. (Pop singer Carly Rae Jepsen takes on the role in this TV special, which also stars Julianne Hough, Keke Palmer and Vanessa Hudgens.) And if the way Donohue has been stealing scenes as Lindsay Jillian, You’re the Worst’s ditzy but big-hearted sexpot, is any indication, she’ll win over plenty more fans by curtain call. Below, Donohue chats with TIME about what sets Grease: Live apart from other productions, goofing off with the Pink Ladies on Snapchat and You’re the Worst’s much-lauded storylines about mental health.

On how Grease: Live puts its spin on a classic:
Though NBC kicked off television’s recent live-musical renaissance with The Sound of Music Live! in 2013, Fox’s Grease: Live will shake up for the format by filming with a live studio audience that will interact with the production throughout the show. “What we’re doing is revolutionary,” says Donohue, who promises an “epic” twist on the musical from director Thomas Kail, who also directed the Broadway smash Hamilton. Departing from the usual static setup of musical theater, Grease: Live will film across multiple sound stages. “This is very much a 360 world that’s alive,” she says. “It’s a concert, a play and a movie all in one.”

The writers have updated the script, too, while seeking to maintain the spirit of the original. While Donohue promises a few references to today’s generation of young people, the most distinctive changes involved personalizing the actors’ lines. “The writers were very much a part of rehearsal process, and they’ve done a great job of writing for the specific voices of the actors involved,” Donohue says. “They’d add jokes that were specific to Keke Palmer’s voice as Marty or my voice as Jan, and the same goes for how they’d write Julianne [Hough] and Vanessa [Hudgens].”

On bonding with the Pink Ladies:
Rehearsals run nine hours a day, six days a week, and Donohue credits her co-stars with keeping the work from becoming too grueling. “Keke Palmer has Snapchat, and she documents all the silliness that happens in our rehearsals,” she says. “We just laugh and crack each other up and do goofy impromptu dance numbers even when we’re not working.” Logging hours together has almost become a good-luck charm for the actors. “Our ritual has become bonding,” Donohue says. “We really just make sure to be on the same page in terms of the energy that we have as a group.”

She’s grown particularly close with pop star Carly Rae Jepsen, who plays Frenchie, as the two are often paired up for interviews. “I’m very into Zodiac signs, so when I meet a fellow Scorpio I always get really excited,” Donohue says. “She’s very good at braiding hair.” Donohue, who has shown off her singing skills on You’re the Worst, and Jepsen, who starred in Cinderella on Broadway in 2014, also gave each other tips about the material. “I’m more experienced in acting and less so with singing, and she’s more experienced with singing,” she says. “We’re both very supportive of each other.”

On You’re the Worst’s dark turn:
The chief pleasure of FXX’s raunch-com You’re the Worst is watching the narcissistic Jimmy (Chris Geere) and reckless Gretchen (Aya Cash) try and resist their obvious chemistry as they insist they’re no good at relationships and destined to disappoint one another. But as Gretchen struggled with a bout of clinical depression in season two that left her nearly catatonic on her couch in some episodes, it was Donohue, as Gretchen’s best pal Lindsay, who stepped up to provide much of the laughs.

“The older I get, the more I’m realizing how much I want to be a part of something meaningful,” Donohue says. “Fans started to open up to us about their own depression and how watching the show literally helped them through their week. When you watch someone on TV go through something that you’re going through that’s difficult, it lets you know that you’re not alone and there’s nothing to be ashamed of. I’m just honored to be a part of something like that.”

On how her characters compare:
Jan, as portrayed by Jamie Donnelly in the 1978 Grease movie, and Lindsay have something in common: they’re often snacking on screen. In Grease, that made Jan the awkward, plump member of the Pink Ladies. But with You’re the Worst, Donohue has praised the fact Lindsay is into more than just salads—she’s the rare female character on TV who isn’t ashamed of her appetite or her curves. “I find it liberating,” Donohue says. “I embrace being able to sexy and curvy and play someone that eats like Lindsay.”

Still, she says Jan is unlike any character she’s ever played before. “What I love about Jan is that she is not—at least not the way I’m portraying her—sexy at all,” Donohue says. “When I go into You’re the Worst, I’m very glammed up and my hair and makeup is va-va-voom. Now what I’m having fun with in Grease is, honestly, I go to rehearsals with zero makeup. When I get pimples, I get excited about it, like ‘Yay! It helps the character!’ The frumpier and uglier and grosser, the better with Jan.”

A version of this story appears in the Feb. 8 issue of TIME, on newsstands now. 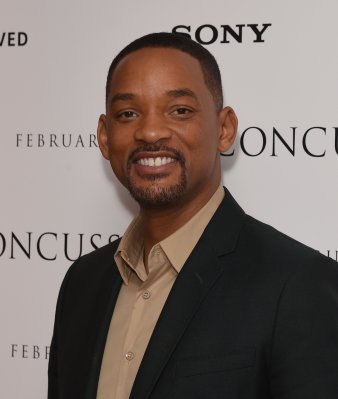 Will Smith Is 'Pleased' With Academy Response to Diversity Issue
Next Up: Editor's Pick