Is the U.S. Looking for a 'Settlement' with Assad?

In the past three weeks, Secretary of State John Kerry has referred to the goal of negotiating an end to the Syrian conflict as a “settlement” four times. This may not seem like a big deal, but diplomats and experts alike have noticed the word choice and have interpreted it as a softening from the long-accepted word, “transition,” which Kerry also still uses.

“None of us are under any illusions that obstacles don’t still exist to trying to seek a political settlement in Syria,” Kerry said January 23 in Riyadh, Saudi Arabia. “We know it’s tough. If it were easy, it would have happened a long time ago. There are sharp divisions within the international community, especially about the future of [Syrian strongman Bashar] Assad, but we are clear about that.”

In determining Assad’s future, the difference between a “transition” and a “settlement,” would imply that Assad might have a chance to stay on in some capacity—something long sought by Assad’s allies Russia and Iran. Kerry’s slight softening comes as he’s been trying to coax Russia, Iran and Syrian opposition to the table for talks in Geneva. The talks, which have been postponed multiple times due to stakeholder objections, are scheduled to begin Friday.

The State Department and White House insist that Kerry means nothing by his word choice. “There is no change in our longstanding policy: we believe Assad has lost all legitimacy to rule and support a political transition that reflects the will of the Syrian people,” says a senior Administration official. But others have noted the change. “I want to believe that the shift reflects a strategic realization that confederation is the most realistic solution here, with Assad becoming part of the Alawite sector’s leadership,” says Michael O’Hanlon, a foreign policy expert with the Brookings Institution, referring to Assad’s Shia sect, the Alawites. Largely Sunni Syria has been oppressed by the Shia Assad family for more than 60 years. “I hope that’s what Kerry is signaling.”

The calculus has changed on Syria in recent months as thousands, soon to be millions, of refugees have poured into Europe fleeing the violence of ISIS in Iraq and with Syria entering its sixth year of civil war. “I see very clearly the slope leading us into the arms of Assad and I don’t really see a way out,” says one European diplomat this week. “There’s an absence of an alternative on our side. We repeat Assad must go but he’s been re-enforced by Russian strikes.”

Assad who just last summer looked poised to be finally forced out, is now in the strongest position he has been in for years thanks to Russia, who has been bombing rebel forces. “There is little evidence to suggest that the Kremlin could persuade Assad to accept any agreement that required his immediate departure from power,” says Paul Sanders, a Russia expert with the Center for the National Interest. “Russia probably could help to persuade Assad to accept a transition, however. Since the administration has not succeeded in removing Assad after almost five years without Russian help, some may think that a negotiated transition is better than nothing.”

The problem has always been that when Americans thinks of “transition,” they think of a presidential transition which implies a change of leader. Russia, not so much. They think of a “transition” that includes Assad. And that has been a main sticking point of any peace talks from the get-go. The difference now is Europe’s changing stance. Once vehemently anti-Assad, Europe is now more afraid of terrorist attacks at home and their own right wings.

“The political situation of [Donald] Trump exists across Europe. Trump is transatlantic,” the European diplomat says, referring to the GOP presidential candidate’s anti-Islamic and anti-immigration stances. Empowering Assad is suddenly looking like the best option for Europe to quickly stem the tide of refugees.

But that is a deal with a devil that has inherent complications for the Obama Administration, says Andrew Tabler, A Syria expert with the Washington Institute for Near East Policy. “Assad doesn’t have the troops to secure all his territory. He needs Hezbollah and Shia militias and Iran for that. And that makes this forced solution potentially explosive,” Tabler says.

The fact that Europe—and maybe Kerry—is even considering Assad option says a lot about Iran-U.S. relations—that they are deeper and growing faster than anyone anticipated. “Both the Arabs and the Israelis have a problem with Iran winning the war in Syria,” Tabler says. In other words, turning back to Assad would not only be a humiliating defeat of a long-stated foreign policy goal, it could have other much more profound implications for the balance of power in the Middle East. 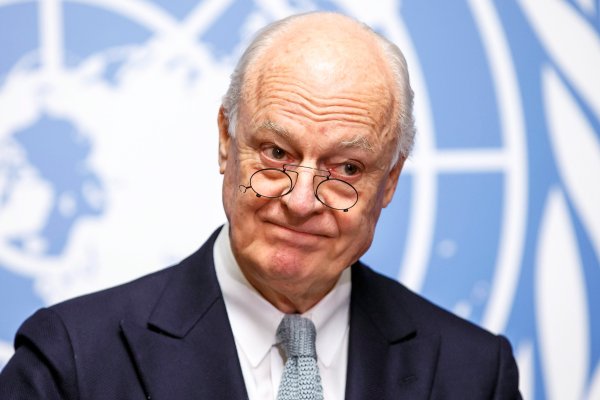 Syrian Peace Talks at a Stalemate Before They Even Begin
Next Up: Editor's Pick