A week before the Iowa caucuses, I drove through rolling, snow-frosted fields east of Des Moines, moving from Marco Rubio to Ted Cruz campaign rallies, listening to Rush Limbaugh–an old Iowa tradition of mine–who was falling apart. El Rushbo sounded as blustery and brilliant as ever to the untrained ear, but he was tiptoeing around Donald Trump, asking rhetorical questions rather than deploying his usual slam-bang apocalyptic barrage. Limbaugh had been a Trump enabler for months–for years, in a metaphoric sense, given his stoking of his listeners’ self-indulgent anger–but now Trump had jumped the shark. The Donald had said that he could work with Harry Reid and Nancy Pelosi. Was that a good thing? Limbaugh pleaded with callers. Wasn’t that what the Republican establishment had been doing all along? And then he talked about a long lunch he’d had with Ted Cruz, and how Cruz was all about uniting conservatives.

Cra-ack. A segment of the foundation supporting Donald Trump’s candidacy seemed to be fissuring. Limbaugh’s petite semidefection was part of a general rush to the exits by movement conservatives who had realized their party was being hijacked. Just as revealing was the roster of Washington types who said they would rather see Trump as the nominee than the corrosive Cruz–Bob Dole, Senator Orrin Hatch, the quiet legion of lawyer-lobbyists who had spent decades sneaking goodies for corporations into the flabby folds of our regulatory legislation. Cruz, who is somewhere to the right of Caligula, was a sly libertarian, campaigning throughout Iowa while opposed to the state’s lucrative ethanol boondoggle. That was his real threat to the GOP establishment: he was a missile pointed directly at their tax breaks.

At least Trump, the nihilist, narcissist, protofascist, was a man they could deal with. There was that word again: deal. Limbaugh repeated it over and over, mesmerized by his sudden discovery of the heart of the matter. There were believers and there were dealmakers. His listeners were believers. And then, as he was speaking, word came that Trump might be dumping the Fox News debate. Limbaugh laughed. This had to be a ploy. Trump couldn’t be serious … although Rush defended it the next day.

As Limbaugh was pondering this, I arrived in Ottumwa for the Cruz rally. In a Trumpless world, I realized, the Republican race would have been a fascinating thing, probably involving the two young Cuban-American Senators. It might even have involved a debate of real substance about really important things. Cruz favors a flat tax with a levy on business sales; Rubio favors a simpler version of the current graduated income tax system. Rubio is an aggressive neoconservative on foreign policy; Cruz is more cautious, wary of attempting regime change in the Middle East, but he camouflages that caution with incendiary rhetoric about carpet bombing and ripping up the Iran deal. Both are superior on the stump, effortlessly eloquent. Cruz has an ironic edge; Rubio is more substantive.

Earlier, at the Rubio rally, I met George and Kathie Held, moderate Republicans who were attracted to Rubio but were undecided. “Rubio may be the best to face Hillary Clinton,” said Kathie, who works at the local Head Start program in Marshalltown. “But we may vote for Cruz because he has a better chance to stop Trump and that’s the most important thing.”

Ahh, Trump. There is a British expression that comes to mind: he is playing “silly buggers” with us, taking us for fools. He has been all along. There was all sorts of speculation about why he would drop out of the Fox debate. He would dominate the news for days with his defiance, shutting out his opponents. He might even get Fox’s Roger Ailes to make a concession–fire the aide who sent out a nasty press release about Trump–but, knowing Ailes, I figured that was as likely as Mexico paying for the wall. Certainly, the substance of debates was a risk for Trump and this was a way to avoid a big one–one in which he might finally have been the target of his opponents.

His ploy did spotlight another difference between Mondo Trump and the GOP. In his mind, this was about money and ratings: he would hit Fox where it lived. In the perennially bellicose Republican mind–as expressed by talk radio and Fox News–Trump was unilaterally disarming, exposing himself as a coward in their battle against the great illusory American slide.

A few days earlier, Trump had said that he was so popular he could shoot someone in the middle of the street and keep his voters. He has now tested that principle: he has shot himself in the gut. We’ll see what happens. 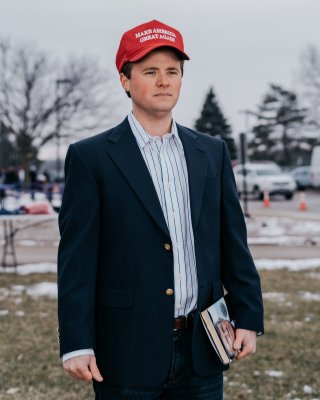 How Trump and Sanders Voters Are Upending U.S Politics
Next Up: Editor's Pick