Review: The Witness Is a Rubik’s Cube, Wrapped in a Mystery, Inside a Video Game

Ever played one of those pencil-and-paper puzzles where you have to connect all the dots with just a few lines? The Witness, available Jan. 26 for Windows PCs and PlayStation 4 and coming to iOS devices later this year, is brimming with hundreds of similar stumpers, each displayed on panels scattered about a beautiful, deserted and largely unexplained island. Unburdened by tutorials or story sequences, players can explore freely from the start and tackle puzzles in any order. Tranquil and mysterious, The Witness quickly tunes you to the mental frequency of Zen gardening–and then sucks you in for hours at a time.

Designer Jonathan Blow has been working on The Witness since 2008, using proceeds from his first, much ballyhooed title, Braid. That game was an elliptical critique of side scrollers like Super Mario Bros. Its enormous success helped fire the indie games movement, making it financially viable to craft alternatives to mainstays like Call of Duty or Halo. This game, though more ambitious, continues Blow’s interest in exploring how we learn and communicate through play. That The Witness’s setting recalls the 1993 classic Myst–the first truly blockbuster computer game–is no accident.

The learning is doled out parsimoniously. Players are presented with mazes, each with a clearly marked beginning and end, through which they must trace a line. The only prohibition is that the line can never cross itself. The first few have obvious solutions that unlock a nearby door or activate an adjoining panel. But these give way to hundreds more–there are over 600 in all–with solutions that range from simple spatial reasoning to bafflingly complex nesting rules created by combining logic from puzzles found elsewhere.

The Witness teaches by intoxicating slow drip, all within a dreamy landscape of crimson forests, ruined windmills and abandoned power stations. Even if the locales and logic are different, the pattern in the player’s mind is the same: with effort (and instructive missteps), sighs of “this is impossible” give way to the nub of an idea that eventually leads to an answer. Solving these puzzles feels less like a fist-pumping achievement than like contemplating life’s challenges while skipping stones across a pond. You may find wisdom; you may not.

That can be a maddening experience. At one point, I spent about eight hours contemplating a single puzzle whose arcane symbols and junctions seemed to slowly calcify my synapses. (In the end, I asked Blow for a hint, a privilege most players won’t have.) At another, my partner found me crouched over the floor of my office with a pair of scissors, a pencil and paper, stalking a solution. (She backed out of the room silently.) The important thing is that The Witness never asks you to go to such lengths. The feeling of epiphany it creates is motivation enough.

What it all means is another matter. Blow creates a sort of narrative through abstract artifacts–statues of people here and there or the occasional diary entry–and you can sharpen the focus if you’re up for solving every single puzzle. But in the end, The Witness’s triumph is its insight into human perception and how information travels. As well as the conviction that with the right frame of mind, any problem can be solved. 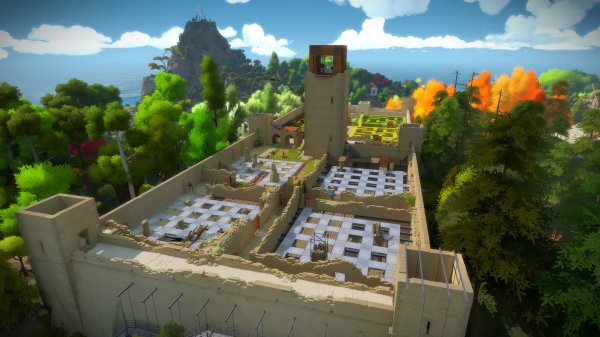 What I Think The Witness Really Means
Next Up: Editor's Pick