Everyone knows that the key to winning the early primaries is organization, assuming everyone has had to sit through the endless morning meetings at TIME. But after hearing this for five presidential elections, I realized that I could–without expensive polls, complicated algorithms or knowing anything about politics–predict the winners of the New Hampshire primary.

All I had to do was anonymously call each candidate’s campaign office, say I was considering coming up to New Hampshire to volunteer for the last week of January and ask about the coolest, most interesting tasks I would get to do. The candidates who offered the lamest jobs would clearly win, since they were the most organized. Unfortunately, I quickly learned that few of the candidates have staff to answer their phones.

Other reporters, facing this challenge, would give up. I, however, asked an intern to keep calling. University of Wisconsin–Eau Claire senior Lauren French was a more convincing “volunteer” than I was, since she was young and enthusiastic and didn’t giggle when pretending to want to go to New Hampshire in January.

French and I found that Martin O’Malley will not win the Democratic primary. That’s because his staffer offered me free housing and said, “In the evening, you’ll all go out and have some beers and have a good time.” O’Malley, at best, might become president of a fraternity. Bernie Sanders and Hillary Clinton both offered really crappy jobs, but Clinton’s involved signing in people to her event, while Sanders, who we predict will win the Democratic primary, would only let me make calls or knock on doors, “whichever you like more.”

Our results definitively show that Jim Gilmore will not win New Hampshire’s Republican primary, because his staffer asked, “I’m always curious, what draws you to Governor Gilmore?” This put me in an awkward position, since it required me to know who Gilmore is. I gathered from her question that he is or had been a governor, so I said I thought he was experienced and trustworthy. “That’s a great way to put it,” she said, before spending three minutes selling me–a guy who was acting pretty pro-Gilmore already–on voting for him. Rick Santorum will also lose, since I was immediately offered a chance to meet him.

When I called Carly Fiorina’s national office, a woman there told me to call the super PAC Carly for America, since “they seem to have the ground-game thing going on.” Directing me to a super PAC, which has to be completely separate from a campaign, seemed obviously illegal, but after talking to the Campaign Legal Center, I learned it’s totally fine. So I called Carly for America, which did have a pretty good ground game, in that its people offered me transportation. And housing. And were going to let me help with “general organization”–which is where they blew it. If organization is the key, I should be kept away from it.

Chris Christie’s gang, however, really hoped I had a car. If I did, “on weekends, we have people coming up from Jersey. We go and take them door to door.” As a person who grew up in Jersey, I feel reasonably sure that means we’d be doing something the Campaign Legal Center would definitely not approve of.

Before his phone cut out, Ben Carson’s guy said he was driving in Vermont getting petitions signed to make sure his candidate got ballot access, none of which seemed to indicate any kind of organization. Jeb Bush’s office promised a little too much, letting me get reactions from people at his town-hall meeting. John Kasich’s headquarters was “desperately needing people.” Despite over a dozen attempts by French and me to reach their New Hampshire and national headquarters, Marco Rubio, Rand Paul and Mike Huckabee did not have enough organization to answer their phones.

The Republican winner in New Hampshire will be Donald Trump. Not only did he make it hard for me to volunteer–the guy on the phone said I would have to sign both a nondisclosure agreement and an “endorsement card”–but also, despite the fact that I have a wimpy voice, I was told I’d get to help with security at a Trump event, which implied there were enough people coming to need security. I’d also hold a Trump sign while waving at cars during rush hour. When you’re devoting manpower to rush hour in New Hampshire, you’re pretty much completely staffed up.

The Stein/French polling company is available for state and local elections, at a fraction of what other firms charge, assuming they charge a lot and the French side accepts 20%. We are confident in our business model, since our volunteer didn’t get to do anything but make phone calls. 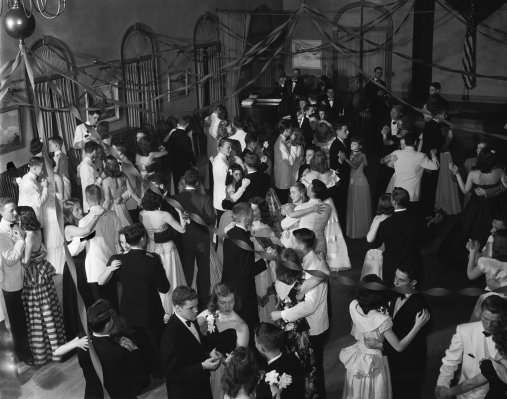 Why Don’t Teenagers Slow Dance Anymore?
Next Up: Editor's Pick