How Trump and Sanders Voters Are Upending U.S Politics

Nick McNamara, 31, Trump supporter “I’m a college graduate. That’s an investment I made to make a good future for myself. But the playing field I’m in right now feels like, ‘What am I supposed to do?’ We’re becoming weakened in the face of the world. We’re not the global superpower that we used to be.”
Benjamin Rasmussen for TIME
By Philip Elliott

Eric Moorman is the kind of voter Donald Trump predicted would be drawn to his unorthodox campaign for the White House–the kind who didn’t care for politics until now. The 56-year-old Iowa resident says he has never attended a political rally before, let alone a Republican presidential caucus on a frigid February night. But here Moorman stood in the cold outside a college auditorium, wearing a yellow Trump hat. “I don’t think we can go to another presidency just business as usual,” he said. “The American Dream is dying.” After nine months of candidate sniping, record audiences for debates and $152 million in television ads, the beginning is coming to an end. And the question that keeps handicappers guessing is not what the latest polls say–there are consistent dead heats in Iowa between first and second place in both parties–but rather who will show up. If a wave of political newbies like Moorman comes in from the cold, both the Republican and Democratic parties are in for a very long, and very frustrating, campaign.

The credit for that–or, depending on your viewpoint, the blame–goes to Trump and Bernie Sanders, and Iowa is just the first test for gauging their real appeal. From opposite ends of the spectrum, both have promised to remake the nation with a populist revolution. You could call their supporters the Apprentice Voters: the fed-up, the tuned-out, the frustrated flock who want their elected leaders to feel their pain, reflect their fury and actually do something about it. They were more likely to watch Trump host The Apprentice than to attend one of his rallies last year. But not anymore.

At more than 100 events TIME has attended over the past year, there is plenty of evidence that this diffuse tribe of political neophytes not only exists but is growing. Its numbers are hard to measure, and its commitment is anything but certain. In interviews, voters confide that they are novices at politics, only to make clear that they are hardly naive. Some are driven by anger and pride, or frustration and fear that are new to them. Most will say that the system is rigged against them, that the wealthy are winning while the middle class falters, and that they are worried about the lives and fortunes of their children. They are steered neither by party nor by ideological strain, and they are moved by the certainty of men like Sanders and Trump. “If you have an excited Democratic base and independents who are saying, ‘You know what, it’s time for real change in this country, it is time for a political revolution,’ then we win,” Sanders tells TIME. Says Trump, in a USA Today op-ed: “My whole campaign has been focused on expanding the number of people who want to, and will, participate in this election cycle.”

Apprentice Voters don’t fit any mold or model. Mike Wiseman, a 42-year-old supply manager who attended Trump’s rally in Muscatine, Iowa, finds himself conflicted about Trump and Sanders, polar opposites on a political spectrum. “I’ve got a weird mix going on,” Wiseman said after hearing Trump’s pitch to build a wall along the U.S.-Mexico border and to stop the immigration of all Muslims. Laurie Frantz, a 46-year-old nurse from Muscatine, attended the same Trump rally but finds things to like about both the New York developer and the Vermont socialist. “Everyone should have free health care and free college,” she said, nodding to central planks of Sanders’ campaign.

This switch-hitting has caused all kinds of chaos in New Hampshire, where voters will cast ballots on Feb. 9. There too the normal alignments have been stirred and shaken: a voter arrived one early-January evening at a rally for Republican Marco Rubio in Hampton, N.H., still sporting a button from a Sanders event earlier in the day. A few days later, a lifelong Democrat who is a social worker in Freedom, N.H., confessed to attending Ted Cruz and Rand Paul rallies. Another voter talked about how he is torn between retired neurosurgeon Ben Carson, a conservative Republican who promises to privatize Medicare, and Sanders. If previous elections are a guide, roughly a fifth of New Hampshire voters will make up their minds the day of the primary, suggesting that polls and predictions are pointless.

The free-floating hopes and fears of Apprentice Voters have confounded the political pros for months. Long lists of Establishment allies no longer matter to most campaigns, and deep-pocketed donors can’t overpower newcomers who ask for $5 at a time online. As both Trump and Sanders draw vast crowds, far larger than those of any other candidate, the chances of an expanded electorate grow. And with it, the odds of a voter revolt rise.

The magic number for Republican and Democratic hopefuls in Iowa is 140,000. That’s the expected turnout for each party on caucus night, Feb. 1. If the combined turnout exceeds that, the outsiders’ chances of victory will rise. Part of the outsiders’ clout comes from the tiny size of the two early states. Of Iowa’s more than 2 million registered voters, only about 20% typically take the trouble to trudge through the snow and sleet to make their preferences known. As democratic exercises go, Iowa is very self-selecting. One caucus skeptic puts it this way: If the Iowa electorate were Fenway Park and only caucusgoers showed up, all but the center-field bleachers would be empty.

In New Hampshire, the numbers are much the same. In a state of 1.3 million people, only about 500,000 turn out for presidential primaries in exciting years. That favors a candidate who generates the most sizzle, but it hardly guarantees a win. In New Hampshire, the largest group of voters are independents, who can choose to vote in either party primary.

All this helps explain why even polls that are consistent have been so wrong in the past. This year, the same polls that show Cruz and Trump essentially tied in Iowa also show that Trump has more first-time voters, which could be either a weakness or a strength. Similarly, Sanders almost ties Hillary Clinton in Iowa but trails her badly among those who have caucused before. Iowa vets say having squadrons of repeat caucusgoers behind you is the closest a candidate can get to a certain win, except, of course, when it isn’t. It is little wonder the Clintons always hated this state and its quirks.

“Bringing on a whole new group of voters, whether it be the Apprentice Voter or independent voters in a Democratic caucus, doesn’t happen by accident,” warns Mitch Stewart, the Barack Obama adviser who helped design the strategy that clobbered Clinton eight years ago. Sanders is starting to heed some of that caution, telling reporters he doubts he can conjure Obama’s 2008 magic. “Do I think that in this campaign that we’re going to match that? I would love to see us do that. I hope we do,” Sanders said outside a union hall. “But frankly, I don’t think we will.” Trump, of course, shows no sign of doubt.

Democrats historically are more comfortable with underdogs turning the caucuses upside down. Jimmy Carter did it in 1976, and Obama followed that route in 2008. But Republicans are typically unaccustomed to rooting for large turnouts and as a result are a little allergic to outsiders. Trump is betting his deep support among caucus newcomers will carry him to victory. But the GOP race typically rewards the best organized, and that should spell hope for Ted Cruz, who is running a textbook campaign to get every evangelical voter to the caucus. Cruz is leaning heavily on his faith, trying to mirror Mike Huckabee’s winning 2008 strategy, which turned out 40,000 votes. Jeb Bush’s campaign, meanwhile, is shooting for a little short of 24,000 votes out of 128,472 caucusgoers, according to a curiously specific campaign memo. Strategists from rival campaigns say Trump’s operation in Iowa is held together with twine and will not be able to get enough people out of their homes and into church basements and school gymnasiums to win. But in reality, no one can predict anything with any certainty. “Who knows who will show up?” said a strategist with deep Iowa experience. “Every four years we say we’re going to break records. And then we don’t.”

And that’s because we are talking about a system that is intentionally unpredictable. At almost 1,700 church basements, high school gyms and even some private homes, Iowans cluster around the coffeepots and talk politics. Campaign volunteers and aides coax those who arrive undecided and cajole those who don’t share their views. It’s harrowing for Iowans–especially first-timers for the caucuses–who stand up in front of friends, neighbors and complete strangers and publicly declare their allegiances. To explain their preferences. To align with candidates who might never become nominees. To come in second when the votes are counted. These nights in Iowa are tests of faith–faith that is not in short supply in Des Moines, Muscatine and Mason City. 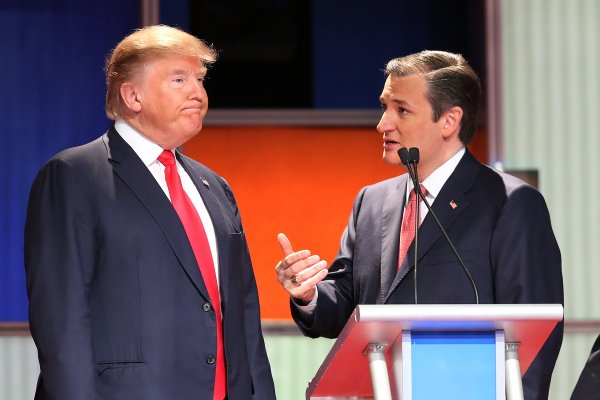