Keep The Promise I and II, two organizations backing Cruz with the capacity to accept unlimited contributions, made the offer Wednesday evening, minutes after Cruz’s campaign issued a formal challenge to Trump to debate in person on Saturday night in Sioux City, Iowa. Cruz’s campaign said they had already locked in the venue and were open to a debate without a moderator.

The offer comes after Trump backed out of Thursday night’s final contest to be broadcast on Fox News, over a feud with moderator Megyn Kelly, and Cruz’s subsequent challenge to Trump for a “mano-a-mano” face-off. Trump will hold a “Special Event to Benefit Veterans Organizations,” at nearby Drake University instead of appearing onstage in Des Moines, his campaign said Wednesday. Trump has thus far declined Cruz’s offer.

“Senator Cruz and Mr. Trump both respect the veterans and hold them in the highest regard but Senator Cruz respects the process and we are calling on Mr. Trump to do the same and debates are the purest form of democracy. Iowans — and Americans — deserve to hear from the frontrunners in this ‘two-man race’ one last time,” said the principal donors of Keep the Promise I, the Mercer family, and Keep the Promise II, the Neugebauer family, in a joint statement released by the groups. “Not only would this be a heck of a debate, but it would also be a terrific opportunity to generate millions of dollars for the veterans.”

The groups laid out four parameters for the donation to veterans groups, saying debate must take place on or before Sunday, January 31st in Iowa, include only those two candidates, allow the candidates to select the moderator, and be an hour long. 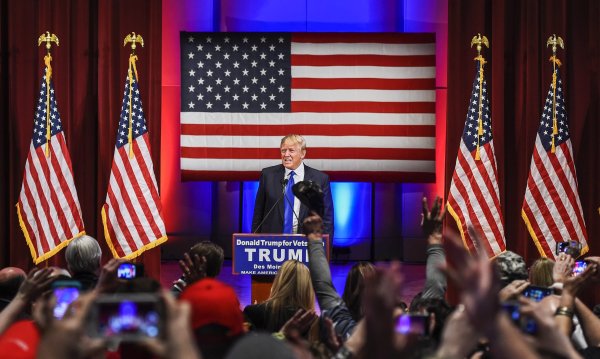 Trump's Absence Felt in Iowa
Next Up: Editor's Pick