How the Iowa Caucuses Became a Big Deal

When Iowans turn out on Monday to caucus for their parties’ nominees for president, Americans from coast to coast will be watching. As the first contest of the campaign, Iowa’s caucuses have taken on an importance far beyond the boundaries of the Hawkeye State.

But it wasn’t always that way.

The caucus system dates to the early days of Iowa statehood, but 19th-century caucuses were poorly regulated and easy to mess with. In the early 20th century, during a larger wave of national support for primary elections, Iowa officials decided to take their nominating decisions away from the local caucuses. The hope was that holding primaries would tamp down the power of the party elite to make decisions without consulting the citizenry.

As TIME later reported, not enough people showed up to vote to make the primaries worth the effort. In fact, Iowa held only one presidential primary election, in 1916; the system was scrapped the very next year. According to an essay by Hugh Winebrenner in the Iowa History Reader, that one primary cost the state a great deal of money and drew only about a third of eligible voters. Perhaps more importantly, none of the major candidates that year bothered to even get on the state’s ballot.

So Iowa went back to the old system, and by the early 1960s, the caucuses had even more power in local party politics than they had had in the intervening decades. But turnout remained low, allowing the parties to wield outsize influence. And the Iowa caucuses were just one more party event in a crowded season, and candidates and the media had no reason to pay the state any special attention.

That changed in 1968, when the Democratic Party as a whole was forced to take stock after one of the most turbulent primary seasons ever resulted in the nomination of a candidate who didn’t even run in the primaries. After that, the Party reformed the way it chose candidates, aiming to, as TIME later put it, “reduce back-room manipulation by bosses, broaden grass-roots participation and produce delegations…that more adequately represent women, blacks and the young —and the preferences of the voters.”

What that meant in 1972, when it came time to select a nominee to run against Richard Nixon, was that state party officials couldn’t just meet privately to pick their delegates to the national party convention. It also happened happened that a quirk of the calendar meant the Iowa caucus date in 1972 would be the first delegate-selecting conference in the country. As a result, candidates actively campaigned in the state, and the media followed. Despite that caucus day being a snowy one, per TIME’s estimate, 45,000 of the state’s Democrats showed up for the more than 2,500 caucuses the party held.

By 1976, when both parties held their caucuses, the world was watching Iowa. “As the curtain raiser on the nominating process,” TIME noted, “the Iowa precinct caucuses stood to give one candidate a publicity bonanza and a jump on his rivals.” And sure enough, they did: Jimmy Carter, then Governor of Georgia, devoted himself to campaigning in the state and came away with about a quarter of the vote, which was more than twice as much as his nearest rival. Though their mathematical impact of those delegates was slim, the support for Carter made a difference for an outsider candidate—so much so that he made it all the way to the White House.

Iowans and the rest of the nation had figured out that their once-sleepy caucuses had become a major part of the American political scene. 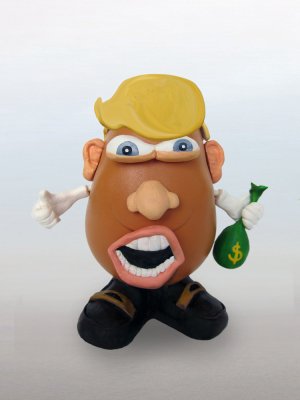 See All the Presidential Frontrunners as Potato Heads
Next Up: Editor's Pick