Responding to an audience member who asked him to describe why he believes Trump is “not right for America,” Bush, the well-funded but underperforming candidate, released one of his sharpest critiques yet of the bombastic figure leading the Republican polls.

“He thinks he’s not being treated fairly. Really? Donald Trump’s not treated fairly by the press? He consumes all the press. It’s like he’s a Stradivarius violinist from the Vienna symphony, man,” Bush said. “The press is just being played like nobody’s business. Poor little Donald, being mistreated. If he’s going to be mistreated now, what will happen? Barack Obama doesn’t go on Fox either, so they have that in common. And now he’s not going to be treated fairly, well how do you think the general election will work out, or dealing with Putin or dealing with the challenges of being president. That notion just doesn’t pass muster, it just doesn’t make any sense.”

Bush added that he has a $20 bet with his staff that Trump will show up to the debate anyway, telling reporters after, “because it’s in his interest.”

Praising Trump’s ability to inspire new voters to the Republican cause and his political incorrectness, Bush joked, “I’m saying all the good things. My mother always makes me say them before I unleash on Donald.” He continued to describe “contributions” Trump has made to the race, before highlighting Trump’s changed positions on gun rights, the use of eminent domain, and taxes.

Comparing Trump to Democratic insurgent Bernie Sanders because of the wealth tax he once supported, Bush continued, “It’s not a conservative to believe in a 14.5% tax on assets. That’s expropriation. That’s not even liberal. Bernie Sanders doesn’t even think he should tax assets.”

Bush acknowledged that the anti-Trump attacks that have become the staple of his campaign events may not be the perfect message for his own candidacy, but said they are more important than his presidential aspirations. “My case against Trump is the case to protect the conservative cause because I’ve lived it, I love it, and I believe in it, and I’ve spent my adult life advocating for it in all sorts of ways,” he said. “And so, this goes beyond my campaign. I don’t know if it’s good for me or bad for me.” 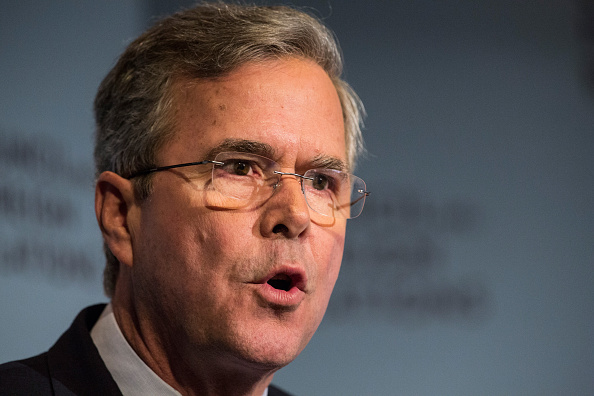