Republican frontrunner Donald Trump has had lots of bad things to say about Fox News Host Megyn Kelly. He has called her “very biased,” implied that her hormonal cycle affects her journalism and tweeted as recently as Wednesday, “I refuse to call Megyn Kelly a bimbo, because that would not be politically correct. Instead I will only call her a lightweight reporter!”

But Kelly isn’t taking the bait. In an interview with TIME just hours before Trump bailed from Thursday’s Fox News debate, Kelly even found some nice words to say about the celebrity real estate developer. “He doesn’t care about that P.C. culture,” she said. “It’s a breath of fresh air.”

That doesn’t mean Kelly is giving any credence to his criticisms of her. “Working the refs is part of the job,” she said. Asked if she actually had any bias towards any candidate, she answered, “Absolutely not.”

On Tuesday, Trump announced that he would skip this week’s debate if Kelly were involved. Her network said it—not Trump—would pick the moderators, and sent out a press statement taunting Trump as a coward for threatening to walk away from tough questions. Trump promptly quit the debate stage, and said he would counter-program the Fox debate with an event of his own. In retribution, Fox released another statement saying Trump’s campaign manager had threatened to further smear Kelly’s name if she remained the manager. “We can’t give into terrorizations toward any of our employees,” the statement said.

For her part, Kelly is trying to stay out of the mess, which began at the first Republican debate, when she asked Trump about some of the crass things he has said about women in the past. She spoke with TIME on Tuesday before Trump withdrew from the debate. Her reps at the network said she was unavailable for a follow-up interview on Wednesday.

Kelly knows all the sound and fury is part of Trump’s brand. “I haven’t been on Twitter as much lately,” she deadpans. Speaking more broadly about the tone of the 2016 race, she cautions that some of the candidates have been cavalier in their approach. “They want George Washington’s job. They all need to watch their communications carefully,” she said.

Even before the latest chapter in the Trump-Fox spat, Kelly was preparing for a debate that she promises will focus on substance and not personalities. It will be the final time the candidates meet face-to-face before Iowa’s Feb. 1 caucuses. “This is probably Debate 501. We’ve moved past Debate 101,” Kelly said. As such, her questions are going to be even tougher.

But that doesn’t mean she’s going out on limbs or trying to trick candidates, she said. “I won’t be asking any questions to which I don’t know the answers,” she said. It’s an approach she brings to the anchor chair after years as an attorney. “It’s your journalistic responsibility. It’s a security blanket,” she said.

That preparation has helped her keep the candidates honest when they try to blow off her questions, whether on the debate stage or on her nightly show, The Kelly File. When she quotes one of their earlier statements or cites a statistic, she makes a point of having the original source just off-camera. “You only have to take that lesson once or twice,” she said.

It will be Kelly’s second turn as a debate moderator during the 2016 campaign, but perhaps not her last. Asked if she would like to moderate one of the three general-election debates between the eventual Republican and Democratic candidates, she had little hesitation. “Hell yes,” she said.

She added that she remains disappointed that the Democrats didn’t partner with Fox News for one of their debates. “They’re crazy not to come over here. We have proven that we are not in the tank for anyone,” Kelly said. “It’s going to be fair, if they did it.” 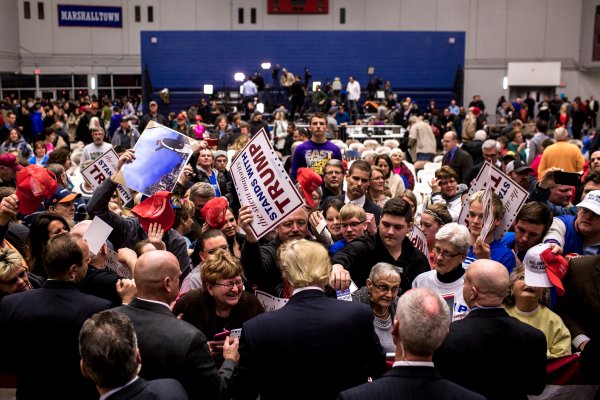 Twitter Says Donald Trump Should Go to the Republican Debate
Next Up: Editor's Pick