The Point of a Disney Princess Isn't Her Talking Time

The new research showing that the more recent Disney princess films feature men speaking more often than women seems to serve as a searing critique of the treatment of women in films, marking a step back where society thought it was taking a step forward. Instead, it should tell us that we need a broader analysis to determine female empowerment in movies.

According to the Washington Post, research from linguists Carmen Fought and Karen Eisenhauer found that the Disney “classics”—Snow White (1937), Cinderella (1950), and Sleeping Beauty (1959)—which have typically been considered to be movies in which the princess is little more than a two-dimensional paper cut-out, have female characters who speak as much or more than male ones. But in the later “Renaissance era” movies—starting with The Little Mermaid (1989) and ending with Mulan (1998)—men outspeak the women, despite critical acclaim that these newer films represented fully realized female characters for the first time in Disney princess history.

More recent films—Princess and the Frog (2009) and Frozen (2013)—also suffer from men talking more than women. Tangled (2010) has women speaking slightly more than men, but only Brave, which focuses on a mother/daughter relationship and was purposefully made to break the princess mold, features women speaking much more than men in the film.

By focusing on speaking time alone, we can miss valuable context. It’s important to look, too, at the roles the women are playing in the films.

The research also shows that the earlier Disney films have more gender balance in the number of speaking roles than later films. This makes sense: In the 1930s to 1950s, society expected women to be surrounded by women only, and anything else was an affront to cultural norms. Sleeping Beauty could not have been spirited away by three friendly male fairies—it would have shocked the public.

In the newer films, instead of groups of women, we see tend to see one strong woman surrounded by supporting male characters, much as we now see from women in leadership roles. Sure, we’ve got Ruth Bader Ginsburg and Hillary Clinton, but they stand alone.

We must also examine the storyline and plot in these films. For example, it makes sense the selfish, misogynistic Beast has staffed his castle with mostly men, and that given the time periods, Pocahontas is surrounded by male explorers and Mulan is alone among male warriors.

In the newer films, unlike the earlier stories, the princesses are active, doing things and creating space for themselves—not passive, being kidnapped, being victimized, and running away. In Tangled, Rapunzel isn’t an object to be rescued; she is a participant in her own journey. In Brave, Merida defies custom to make her own path. In Princess and the Frog, Tiana works to own her own business in a world controlled by men. In Frozen, Elsa and Anna rule their kingdom.

It’s also noteworthy that the women in these modern films are complimented more for their achievements and character traits than their looks, compared to the earlier movies. That alone shows how far women have come in earning true protagonist status in film. 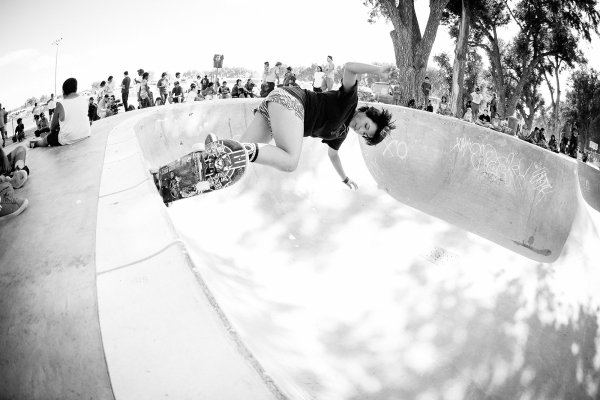 See How Skateboarding Is Changing Native American Youth Culture
Next Up: Editor's Pick