If you ever find yourself stranded at sea aboard an oil tanker that’s been split in two by a Nor’easter, Chris Pine is the guy you want showing up in the rescue boat. Stalwart, resourceful and as lustrously handsome as a comic-book football hero, Pine anchors The Finest Hours, directed by Craig Gillespie (Lars and the Real Girl), the story of a near-miraculous Coast Guard rescue that took place just off Cape Cod in 1952. A vicious storm had split the SS Pendleton in half like a toy: In the bow, the captain and seven crewmembers died, but under the guidance of chief engineer Raymond Sybert (here played by Casey Affleck), more than 30 crewmen managed to survive in the stern, now a ragged, crippled half-ship lurching and listing in the perilous seas. Pine plays coxswain Bernie Webber, stationed in Chatham, Mass., who gathered a volunteer group of three in an impossibly small motorized wooden lifeboat and headed out to sea in the thick of the storm. Thanks to a combination of perseverance, smart seamanship and luck—and without a compass, since it had broken en route—they found the truncated ship and managed to save 32 of the 33 crewmen who’d survived to that point.

The Coast Guard considers the Pendleton rescue the most daring in its history, and The Finest Hours—adapted from Casey Sherman and Michael J. Tougias’s 2009 book of the same name—does its damnedest to live up to the legend. It’s hard to say whether special effects have ruined sea-disaster movies or made them more harrowing: In old Hollywood, or at least older Hollywood, a filmmaker would have used the shorthand of miniatures and camera tricks—magical in its own way—to create the illusion of a 50-foot wave encroaching upon a fragile vessel. In The Finest Hours, those waves seem poised to swallow us, too, particularly if you opt to see the picture in 3D. Early on, a Pendleton crewmember dashes above deck toward the bow to alert the captain to a major problem, rushing along a ladder that leads to… nowhere. For a moment, he hangs in the air as he reckons with the sight of the ship’s other half bobbing in the waves nearby, an instant that captures the mindless cruelty of the sea.

But if the effects are intense in places, they also lack poetry. Their painstaking CGI realism doesn’t necessarily make them more realistic, just more overwhelming—they’re exactly what we expect from a blockbuster, and how can majesty come from something we’ve come to expect? In the end, the actors’ faces and voices tell us more about the frailty of humankind than a bunch of fake waves do. Affleck’s Sybert is the guy on the ship whom nobody likes, wedged involuntarily into an emergency leadership position. His social awkwardness is written right into the flat tunelessness of his voice, yet he’s the one who best understands the fragile relationship between his vessel and the threatening seas.

And if all else fails, you can rely on Pine. Forget the picture’s flaccid framing story, a romance between Webber and his fiancée, played by Holliday Grainger (as adorable as a human cupcake but with little to do). As Pine’s Webber navigates that seemingly helpless little boat, squinting into the driving snow and more than once nearly falling victim to the ocean’s mighty maw, he’s the movie’s finest special effect—not because he’s mindlessly brave, but because he lets us see how scared he is. 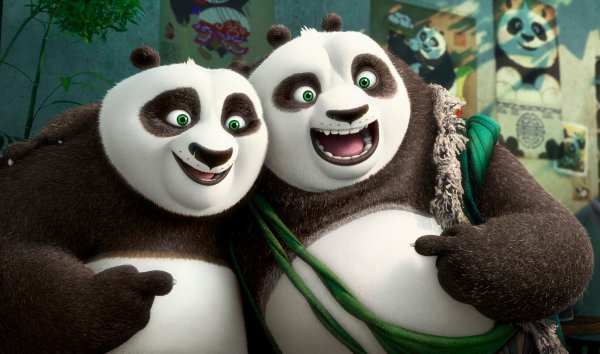 Review: Kung Fu Panda 3 Is a Blowout of Color, Now with More Pandas
Next Up: Editor's Pick