Earlier this week, Barack Obama again rejected Mitt Romney’s 2012 campaign claim that Russia is America’s biggest “geopolitical foe.” In fact, Obama said, Russia is a regional power acting out of “weakness,” adding that he worries more about a mushroom cloud over New York City than he does about Vladimir Putin.

Although Putin is dangerous and nuclear terrorism is an extremely serious threat, neither one sits at the very top of his foreign policy agenda. For a clue towards what occupies the president most, look no farther than his visit Friday with the king of Saudi Arabia.

Even after Putin’s thuggish annexation of Crimea, it’s not Russia and Europe that matter most to Obama’s agenda. It’s the Middle East. Let us count the ways.

First, the Middle East is the site of Obama’s two most ambitious foreign policy projects. One is Obama’s negotiation with Iran over its nuclear program. Preventing an Iranian bomb has been a top American priority for more than a decade, while Iran has been an avowed U.S. enemy for 35 years. The outcome of the nuclear talks will impact Obama’s cherished nuclear nonproliferation agenda (refer again to his line about a nuke in Manhattan), not to mention the security of Israeli security and the entire region’s balance of power—one reason why the Saudis have been freaking out over the talks.

The second project is the effort to make peace deal between Israel and the Palestinians—which are at an especially critical point. Israeli Prime Minister Benjamin Netanyahu must decide by this weekend whether to proceed with a planned release of Palestinian prisoners; the Israeli leader is reportedly hesitant given signs that the peace process has stalled out. If Netanyahu decides not to release those prisoners, the talks couple collapse—potentially triggering for a new wave of violence and killing the prospects for a historic deal for years, possibly forever.

Then there’s Syria, whose civil war is destabilizing the region, whipping up sectarian violence from Lebanon to Iraq, and threatening Jordan’s stability. Even more ominously, Syria is now a training ground for jihadis who dream of killing westerners. On Wednesday the New York Times reported that Islamic radicals are traveling from Pakistan to Syria “to lay the foundation for future strikes against Europe and the United States. There won’t be a shooting war between America and Russia anytime soon. But there really might be a big terror attack that originates in the Middle East. Remember last summer’s terror alert, which led to the closure of embassies around the region?

Nor is Syria the only Middle Eastern country from which terrorists could strike. Don’t forget the strong al Qaeda presence in Yemen, home to the group’s terrifying master bomb maker—or the recent resurgence of al Qaeda in Iraq.

Finally, there’s oil. America is growing more energy independent, and now imports only about a quarter of its oil supplies from the Persian Gulf. But energy markets are global, so any disruption in oil supplies—or even fear of regional instability—cranks up prices for everyone. Global oil prices surged at the mere threat of a U.S. strike on Syria last summer, even though Syria’s oil exports are relatively puny. The world economy still depends mightily on the Middle East’s black crude.

None of this means that Vladimir Putin’s recent actions don’t have important implications for questions like the future of Europe, the fate of NATO and a world economy that could be dented by reciprocal sanctions. And certainly, if Putin orders his army into eastern Ukraine, the situation will escalate to dangerous new levels.

Even so, it will be hard to compete with the Middle East’s implications for nuclear proliferation, terrorism, Israeli security and the global economy. That’s why the most important stop on Obama’s world trip may well be the one he makes Friday in the desert kingdom of Saudi Arabia. 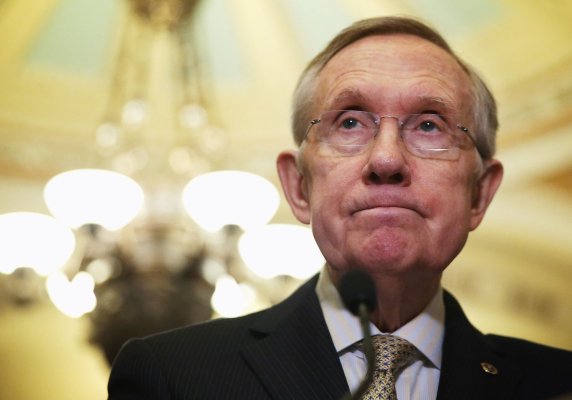 Congress Closer to Giving Ukraine $1B Loan
Next Up: Editor's Pick