Republican presidential candidate Mike Huckabee made a video parody of Adele’s “Hello” that shows how much Ted Cruz has gotten under his skin.

In a three-and-a-half minute video posted Wednesday, a ringer for Adele name drops cities like Ankeny and Davenport and Iowa staples like Pizza Ranch and Le Mars ice cream, while making the usual criticism of the Democratic field, noting that if Vermont Sen. Bernie Sanders wins “I’m gonna die” and showing Hillary Clinton doing the Whip/Nae Nae with Ellen DeGeneres.

But the only Republican targeted in the video is Cruz, who has support from many of the Evangelical Christians that Huckabee rode to his 2008 Iowa caucus victory.

At one point in the video, the singer says “this crazy circus” has “gone cuckoo-ca-choo” while Cruz is shown with conservative media personality Glenn Beck, who endorsed him on Saturday. At another point, she says the election has “all gone insane” while Cruz is shown being blocked by a Huckabee campaign staffer from going on stage at a September rally for Kentucky county clerk Kim Davis.

The latter image is telling, since it’s not a moment that most voters would immediately recognize nor the most obvious choice for a visual about the 2016 election cycle, which has provided more than its fair share of crazy moments.

But Cruz’s support among Evangelical voters has made Huckabee an afterthought in the GOP field. A super PAC backing the former Arkansas Governor, Pursuing America’s Greatness, put together a 30-second ad which argued that Cruz was not “steadfast” in his faith and another that called him a “phony” who doesn’t tithe and won’t fight gay marriage.

Cruz currently sits in second place after Donald Trump in the RealClearPolitics average of polls in Iowa, with 27.5 percent. Huckabee is averaging 2.2 percent. 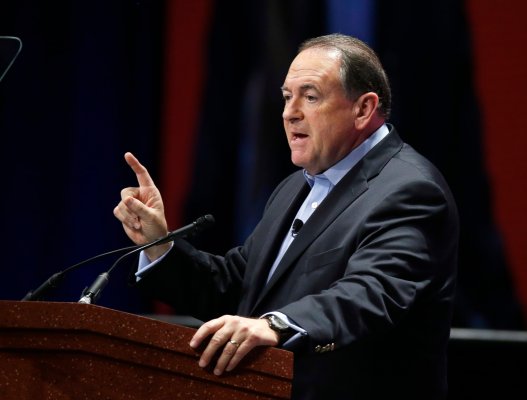 Huckabee Allies Take On Cruz in New Ad
Next Up: Editor's Pick