6 Songs You Wish Were the New Rihanna Single

Rihanna’s long-awaited album Anti took a step toward the finish line with the release of her new Drake collaboration “Work,” on Wednesday. Given the three-plus year wait for a new Rihanna LP, any new material from the singer is welcome. But… “Work” is a tepid offering from a singer more beloved for her of-the-moment dance-pop bangers than her ballads. No matter how “timeless” she promises her incoming album will be, sometimes the Navy just wants to sweat. In that case, here are a few songs that will fill the void on your gym playlists:

If you’ve been asking “Where have you been?” to Rihanna’s EDM days, you can find love with this all-star collaboration straight out of the Netherlands: Dutch DJ-producer Tiësto, his wunderkind protege, Oliver Heldens and “Somebody” singer Natalie La Rose offer up a spring-loaded club-thumper that’ll make you feel like the only girl (or boy) in the world for just a few minutes.

The English duo’s tropical new single features the kind of pulse-spiking bass drop more suited for hitting the beach, not a dark club. And yeah, it’s got some “Lean On” vibes going on, but Rihanna could have settled that territory first—Diplo originally offered the Major Lazer track to her team before releasing the song with MØ’s vocals.

Of all the songs on Sia’s new album This Is Acting, which is made up of rejected tracks Sia wrote for other artists, none announces its intended singer like “Cheap Thrills”—the buoyant party anthem couldn’t be more Rihanna-esque unless Rihanna sang it herself. Ultimately, neither party thought it was a perfect fit: “I realized just as soon as I was cutting it that it sounded a little bit too Brit-pop for her,” Sia recently explained. “It’s more Icona Pop.”

Yup, another Rihanna reject. Sia admits that she didn’t think the song was up the par, telling Rolling Stone, “I thought there was something about the chorus that seemed fun about this song, but I never thought it would see the light of day.” That’s Rihanna’s loss: “Reaper,” co-produced and co-written by Kanye West, is actually one of the best songs on This Is Acting.

As TIME declared last June, this 18-year-old’s island-pop stunner “Lush Life” was “the Rihanna-Style Summer Jam We Deserve.” Though Larsson hails from Sweden, far, far away from Rihanna’s home country of Barbados, she’s been dealing with Rihanna comparisons since the beginning of her career: “It’s just funny to me, because I’ve never idolized Rihanna the way I do Beyoncé,” she told PopCrush. “When I first released my music I did get that comparison a lot … it’s a good thing.”

This solo track from a member of K-pop group 2NE1 is more focused on highlighting CL’s rap abilities than her singing skills, but with so many references to a jet-setting life of luxury, it’s basically Rihanna’s Instagram in song form—one that’s probably best enjoyed on a pair of $9,000 golden headphones. 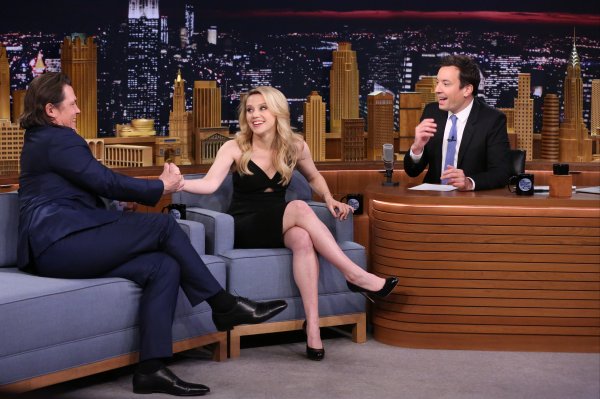 Watch Josh Brolin and Kate McKinnon Do Their Best Celebrity Impressions With Jimmy Fallon
Next Up: Editor's Pick