Slowing iPhone Sales Are a Huge Headache for Apple

It appears Apple’s days of rabid growth are over.

The Cupertino, Calif. firm is forecasting its first sales decline in over a decade, according to a company filing posted Tuesday. Apple’s guidance for revenue in the current quarter, ending in March, is between $50 and $53 billion. Even the high end of that range falls below the $58 billion Apple generated during the same period last year.

If Apple’s own predictions come to pass, the company is about to mark its first quarterly revenue drop since 2003. The company’s stock was down more than 1% in after-hours trading Tuesday.

Apple’s biggest headache? Flagging iPhone sales. The smartphone is by far the company’s biggest source of revenue. But the iPhone just had its slowest growth quarter since it was released in 2007, with revenue from the device up just 1%.

Still, it’s not all doom and gloom. Apple posted record quarterly revenue for the three-month period ending in December, $75.9 billion compared to $74.6 billion a year ago. But Tuesday’s results lend credence to analysts’ warnings that Apple’s growth is slowing.

“They’re sort of a victim of their own success, but in China it’s magnified,” says Arcuri. “The way they’re going to grow in China is if more [customers] come into the premium phone market, which will happen but it’s going to take time.”

All told, Tuesday’s earnings report will fuel concerns that iPhone sales have peaked. That conversation first started when two of Apple’s biggest suppliers lowered their forecasts for the first quarter of this year, a sign that iPhone demand is dropping.

But there is hope for the iPhone. Apple releases new handsets on an annual cycle, with wholly new models in “A” years and minor upgrades in “B” models. This year will see the former, offering Apple the chance to wow consumers once again.

Arcuri adds that many iPhone owners are on a two-year upgrade cycle pegged to “A” years, so those periods naturally see higher sales. “The iPhone 6s could have been the best thing since sliced bread, but people aren’t going to buy it because they bought the 6,” he says.

While the iPhone remains Apple’s most critical device, the company has strived to dispel the idea that it’s a one-trick pony. Apple has expanded into new product categories like smartwatches, and revamped its Apple TV in 2015. Apple doesn’t break out individual sales figures for these devices, but instead lumps them into a general “Other” category. That group saw a 62% boost in revenue year-over-year in the most recent quarter.

In a call following the earnings report Tuesday, Apple also highlighted the growth of its Services category, which is up 15% year-over-year for the quarter. That includes items like iTunes music sales, App Store sales and Apple Pay fees. 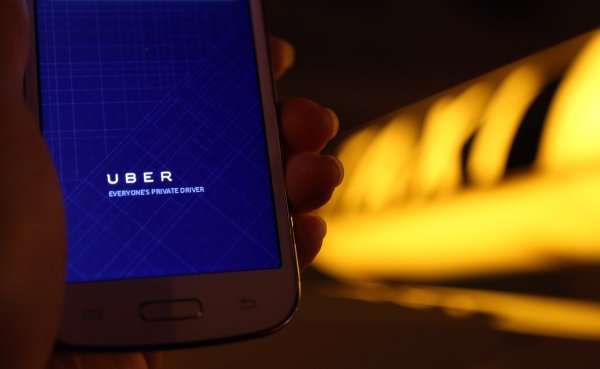 Uber Found the Perfect Way to Distract Drunk Passengers
Next Up: Editor's Pick