In his endorsement, Falwell called Trump “a successful executive and entrepreneur, a wonderful father and a man who I believe can lead our country to greatness again.”

“It is truly an honor to receive Jerry’s endorsement,” Trump said in the statement. “Not only is he a high quality person, with a wonderful family, whom I have great respect for – I also consider him a very good friend and his support means so much to me.”

Falwell may have just officially announced his endorsement, but his political leanings were clear when he introduced Trump at Liberty University on Martin Luther King Day. Falwell called Trump a “breath of fresh air” in the introduction, compared him to Ronald Reagan and Falwell’s own father, and said, “In my opinion, Mr. Trump lives a life of loving and helping others … as Jesus taught in the New Testament.”

Falwell’s endorsement is personal; Liberty University does not endorse political candidates. (Many presidential candidates have spoken there in the past year, however, and Texas Sen. Ted Cruz launched his candidacy at the school.) But the endorsement from a prominent evangelical like Falwell coming just a week before the Iowa caucuses can only help Trump muscle out Cruz for the religious vote.

Cruz has been trying to undermine Trump with this voting bloc by attacking the thrice-married, formerly pro-choice candidate on his “New York values.” Yet Trump still garnered the support of 42% of evangelicals in a recent New York Times/CBS News poll, over Cruz’s 25%.

TIME’s Elizabeth Dias and Alex Altman spoke to Tony Perkins, president of the Family Research Council, about Trump’s surprising success with Christian voters. Perkins said many evangelicals feel “beaten down” by political correctness. “Now they see Donald Trump, who is taking on that same elitist politically correct mindset and not backing down,” he said. “They find common cause in this guy, even though he comes from a completely different world.”

To be sure, not all religious right leaders support Trump. Glenn Beck and Russell Moore, for example, were recently featured in National Review’s anti-Trump issue. But Falwell’s endorsement gives credence to the trend, cementing Trump’s appeal with faith voters at the top. 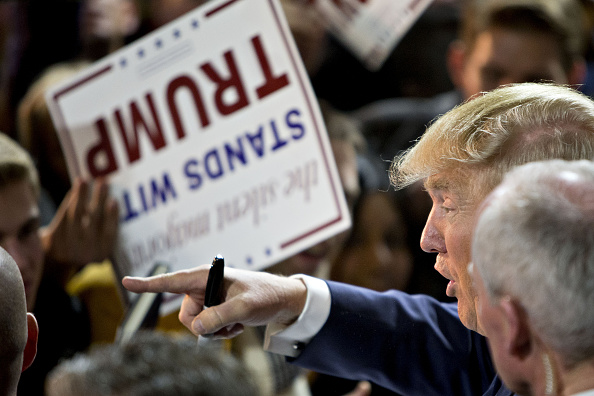 Cruz Super PAC Takes Aim at Trump on Abortion
Next Up: Editor's Pick