The Republican Party’s self-described “prince of light and hope” kicked off his 75th town hall in the Granite State on Sunday with a sober warning to the country to avoid following historical precedent in ostracizing minorities. Alluding to Donald Trump, Kasich name-checked the anticommunist witch hunt by Joe McCarthy and the actual Salem witch trial.

“I get a sense when I look at what is happening in our country that we have the potential to start another movement here that doesn’t represent the best of us,” Kasich said, refusing to specifically name the GOP front-runner. The new focus, Kasich explained later in a one-on-one interview with TIME on his campaign bus, stemmed from reading a BBC article comparing the Trump moment to the “Know-Nothings” and other historical movements.

“I’m concerned about negativity rising in America,” he said, as he passed the article to staffers on his iPad to read. “I’m concerned about people thinking we should ban all Muslims. I think it represents fear, insecurity, and we just have to have antidote.”

As many of his rivals seek to capture a slice of the Trump electorate by focusing on the fear and anger, Kasich is pledging to be steadfastly positive, even as his super PAC and campaign begin negative attack ads to bolster his candidacy in response to criticism from other candidates. “A little bit of hyperbole here,” Kasich quipped of his self-imposed nickname. “It’s all come into focus here as I’ve thought about these past historic movements and where we are today. And I just want to be positive.”

Kasich brushed off the suggestion from Senator Marco Rubio and others who have said they no longer recognize the country. “I do recognize this country — I don’t think that’s where we live,” Kasich told TIME of his rivals’ arguments. “You can appeal to that, but I don’t. “

Kasich town halls are part sermon and part history lesson, as much as they are designed to boost his candidacy. “I think I am steering people away from it, that’s what my town halls are,” he said of the negativity permeating the presidential race. He told one youthful questioner Sunday to be sure to “say your prayers,” adding, “if you’re ever confused, talk to your mom.” At other points, he regales those in attendance with his record of balancing the budget and stories of Ronald Reagan and Tip O’Neill negotiating deals.

Despite writing off Iowa — he doesn’t even plan to campaign there in the days leading up to the caucuses — Kasich argued he thinks he can make his case in more conservative states. “I think the message will work anywhere,” he said. “We’re just here because we didn’t have enough time to divide ourselves in both places — it’s smaller, more focused, we’re really able to focus on this state.”

Reflecting on his seven-month campaign, Kasich, who is locked in a close battle for second-place in New Hampshire, maintained he hasn’t altered his positions on the campaign. “I’m not changed,” he said. “I’m having a great time. I’m surprised I’m having so much fun.” 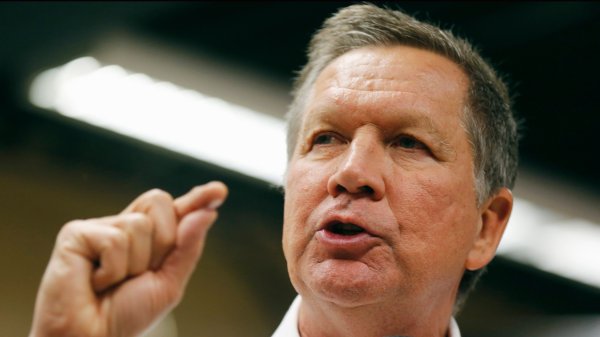