In the mid-1920s, the Scottish inventor John Logie Baird had an idea. If he could rig up a series of revolving discs, each with a lens around their edges, they could break down the light reflected by an object placed in front of them. By capturing the light on the other side of the discs, turning those broken-down flashes into a sort of electric code and transmitting that code to a receiver, he could reconstruct the image of the original object.

It may sound crude today, but it was basically a television—and Tuesday marks the 90th anniversary of Baird’s Jan. 26, 1926, demonstration of the device to a group of scientists in London. Though Baird (who also had an early patent on a waterproof sock) wasn’t the first to think of ways to send images through space, that demo is a milestone in the history of TV. What attendees saw would have looked something like this, the first recorded image captured from Baird’s television screen:

On Jan. 26, 1926, John Logie Baird successfully demonstrated his invention to members of the Royal Institution and a reporter from the Times newspaper. This image is the first recorded picture taken from a TV screen.
Science & Society Picture Library / Getty Images

“The two score gentlemen who went were impressed deeply by the ingenuity of Mr. Baird’s ‘optical lever,’ a series of whirling lenses mounted on discs, which break up an optical image into minute constituent parts. They were even more impressed by the Baird photo-electric cell, of the colloidal selenium type, which could capture and transmit the minute image parts at unprecedented speed,” TIME noted the following year, after Baird had figured out a way to transmit images in the dark using infrared. (That invention, “noctovision,” as opposed to “television,” didn’t quite catch on.)

In 1928, when London’s Selfridge’s department store began offering shoppers the materials to receive television in their homes, Baird showed up to celebrate—and to issue a warning, something that should have been obvious to anyone who saw the photo above: that buyers, who would at the time have been tinkerers rather than entertainment junkies, should only expect to be able to see blurry silhouettes. 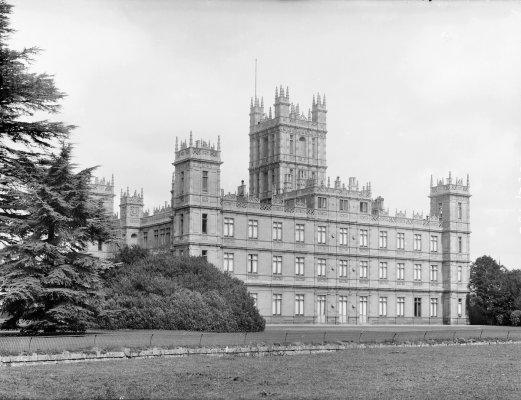 Real History at the 'Downton Abbey' Set Goes Back to Ancient Egypt
Next Up: Editor's Pick