The Revenant has been making waves in the movie world since its Christmas day release, particularly for the hyper-realistic scene in which Leonardo DiCaprio’s character is savagely attacked by a bear. However, as authentic as the grizzly appears, the now-infamous beast is actually a result of CGI. “There was no bear ever on set,” stuntman Glenn Ennis told Global News. “The closest a bear ever got to set (that we knew of) was at the Calgary Zoo.”

Ennis was one of two stuntmen who stood in for the computer-generated bear while filming was taking place, and was charged with portraying as convincing a grizzly as possible. “In rehearsals, I would wear a blue suit with a bear head,” he said. “Obviously that doesn’t make it into the film, and the CGI guys paint the bear in. Alejandro [G. Iñárritu] was adamant that the blue bear moved just like a real bear would move, and it was essential that it had the same nuances that a bear would have. Even though it was a big Smurf bear, it still had to be as authentic as possible.”

Read More: This Video Is the Only Cure for Watching The Revenant

The 51-year-old Vancouverite explained that the role often required him to spend quite a bit of time up close and personal with the film’s star: “If you notice the bear head in the picture, they wanted the bear mouth to be right on his lower back. I was supposed to grab his jacket with my hand to make it look like the bear’s jaws were pulling it. In order to have the bear’s jaw in the small of his back, basically my face was in his butt. My face was in Leo’s butt for a fair bit of time. I can see how that’s someone’s fantasy, but it wasn’t mine!” 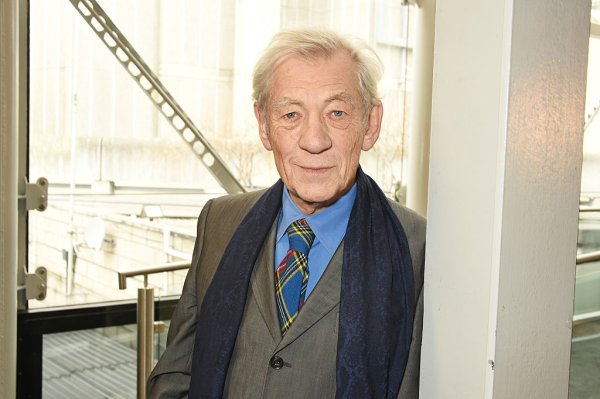 Ian McKellen Says Gay People Are ‘Disregarded’ By Oscars Amid Diversity Controversy
Next Up: Editor's Pick