Ask anyone who’s ever resolved to break up with sweets and then crumbled at the sight of a cookie: it’s tough to quit eating sugar. Now, a new animal study suggests that the reason why goes beyond the brain’s simple craving for sweetness. Sugar activates reward areas of the brain that are associated with both sweetness and the need for calories. (Regardless of your personal relationship with calories, your body considers them a big plus and goes after them.)

Now, in the new paper published in the journal Nature Neuroscience, researchers wanted to find out if these two rewards—sweetness and calories—travel along the same brain circuitry. To find out, they fed mice a sugar solution with calories and a zero-calorie version made with sucralose, an artificial sweetener. They found that in the brains of the mice, sweet taste is processed in the ventral striatum (which is part of the brain’s reward system). But nutrition—including calories—was processed in another part of the reward center: the dorsal striatum, an evolutionarily ancient part of the brain that activates motor behavior.

“What we show now is that this supposedly motor part of the brain is not really completely motor, but it has a role in generating new behaviors that respond to rewards in the environment,” says senior author Ivan de Araujo, associate fellow at the Yale University-affiliated John B. Pierce Laboratory in New Haven.

Surprisingly, the mice brain’s desire for calories even overrode the desire for sweetness. In fact, when the researchers laced the sugary drink with a bitter, terrible-tasting compound, the mice licked more of it than the sweet-tasting calorie-free kind.

In other words, when the part of the brain that responds to calories gets stimulated, the animals act accordingly. “We show that this area [of the brain] basically commands the behavior of the animal”—to keep eating, in this case, even though it tastes terrible—”and allows the animal to disregard any aversions in order to prioritize energy-seeking.”

To confirm the results, they repeated the experiment, but first, they removed cells in the dorsal striatum of the mice. Absent the brain region that prioritizes calories, the mice chose the sweet-tasting sucralose drink, not the high-calorie but awful-tasting one.

MORE: Sugar Warning Labels Get A Boost From Science

Indeed, since sugar comes with the reward of both sweetness and calories, that might be part of the reason why it’s so hard to resist—even when the option of artificial sweeteners is present. “Artificial sweeteners basically produce a weaker response in this reward system compared to sugars,” de Araujo says.

That calories win over sweetness likely has implications for humans, he adds.

“Humans have a modern food environment that’s being monitored by an old brain,” he says, referring to the evolutionary role of the dorsal striatum—the part that says all calories are good calories. “Nature found a reward system that seeks for sugar and accumulates sugar as much as it can; certainly this system is still functional in humans, and although we have this excess provision of sugar in the market, it’s still driving our behaviors in some way or another.” 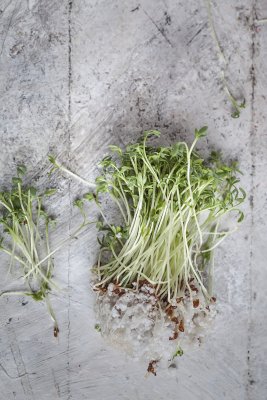 Everything You Need to Know About Microgreens
Next Up: Editor's Pick