One Week Until Iowa

The Iowa caucuses are one week away.

In case this presidential cycle wasn’t weird enough, former New York City Mayor Michael Bloomberg is contemplating a third-party run should Bernie Sanders and Donald Trump or Ted Cruz be the nominees. But Bloomberg won’t have the luxury of waiting until the nominations are set, with ballot-access requirements necessitating a decision in March. About three-times as rich as Trump, Bloomberg would have to spend a considerable portion of his fortune to challenge the two-party system as an independent. But a note of skepticism: he’s contemplated this every four years for at least the last eight.

Donald Trump is campaigning like he means it in Iowa, where he hopes to unseat Cruz at the top of the caucuses. Trump attended church on Sunday and is staying at hotels in the state, rather than continuing his past practice of flying in before and departing immediately after on his private jet. Trump is now hoping for a 1-2 punch in Iowa and New Hampshire to set himself on the path to the nomination. But Trump is betting on a large universe of first-time caucus-goers to boost him to the top slot in the state, a bet that can be affected by weather and other factors.

Jeb Bush is finding his voice on the campaign trail, even if he loses it on the debate stage. Cruz makes a false statement about insurance in Texas. And Ben Carson writes off his own ad.

Iowa Democrats are struggling to complete preparations for the caucuses, potentially jeopardizing the state’s first-in-the-nation status. Martin O’Malley highlights Sanders’ socialism and mulls why he’s struggling to catch fire. And President Obama weighs in on the Democratic race.

Obama on Iowa, Clinton, Sanders and 2016
The president offers his most expansive comments yet on the race to succeed him in the White House [Politico]

“The way I read what he said is if I didn’t get the nomination, he might consider it. Well, I’m going to relieve him of that and get the nomination so he doesn’t have to.” — Hillary Clinton to NBC on the prospect of a Michael Bloomberg campaign

“I could stand in the middle of Fifth Avenue and shoot somebody and I wouldn’t lose voters.” —Donald Trump at an Iowa rally on Saturday

BONUS: “If he shot somebody, he’ll probably be convicted of a first-degree felony and sent to prison. Felons probably can’t run for president. I’m just saying.” — Jeb Bush responding to Trump’s comment in New Hampshire

Ben Carson ‘Horrified’ By His Own Campaign Ad [TIME]

Inside the Political Ad War You Haven’t Heard About [TIME] 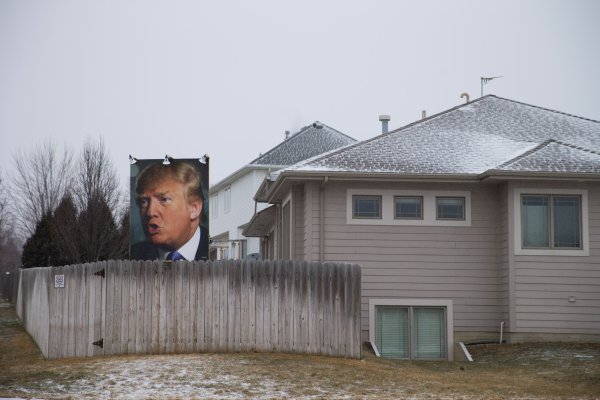 The Radio Race
Next Up: Editor's Pick