The Detention of a U.S. Student in North Korea Underscores the Risks of Traveling There

A uniformed tour guide gestures to tourists outside the War Museum in Pyongyang on Oct. 9, 2015
Ed Jones—AFP/Getty Images
By Charlie Campbell

However, last Friday’s announcement that an American student had been detained in Pyongyang for supposed “hostile acts” during a guided tour has, once again, laid bare the risks of allowing one of the world’s most repressive and unpredictable regimes to be your host.

Otto Frederick Warmbier, a 21-year-old University of Virginia economics student, was reportedly seized at Pyongyang airport before his scheduled flight to China on Jan. 2. The Korean-language state broadcaster KCNA said Warmbier “aimed to destroy the country’s unity” and was being “manipulated by the U.S. government.”

Unconfirmed reports from a passenger on what was supposed to be Warmbier’s flight suggested the American was dragged away by armed guards. The witness, who identified himself only as Darragh, told the U.K.’s Independent daily that Warmbier’s tour group “were up until four or five in the morning drinking vodka and having fun.”

According to Adam Cathcart, a North Korea specialist at the University of Leeds, in England, while the postdetention treatment of individuals is always political and used for domestic and international propaganda, “the arrests themselves are usually triggered by behavior that the North Korean authorities can classify as illegal.”

Most recently these include Kenneth Bae, a Korean-American missionary sentenced to 15 years of hard labor for proselytizing, and Matthew Todd Miller, a 25-year-old American whom the North Koreans accused of espionage. Both were subsequently released.

A statement by Warmbier’s tour company said he was involved in some kind of “incident” at his hotel. That may have been completely unwitting: North Korean society has many foibles that trip up unsuspecting Westerners — such as taking a photograph of passersby, or frankly discussing international affairs, or failing to show appropriate reverence near images of founding father Kim Il Sung.

Such slips typically merit a dressing down rather than arrest. However, “Warmbier got detained whereas others have not done, which leads one to ask what instructions the North Korean authorities are under at this particular moment in time,” says Christopher Green, co-editor of the Sino-NK analysis forum.

Green recalls ​hearing about “drunken hijinks” ​on other tours to ​ North Korea in ​recent years ​ that​ ​resulted in hotel management, tour guides and tour-company management ​being ​called together, with the aim​ being to ​ensure that “everyone was seen to be taking it seriously.”

Much would seem to depend on the political climate at the time. At present, international pressure is building on North Korea after the state claimed to have reached the “next level of nuclear might” by detonating what it said was a hydrogen bomb on Jan. 6. Experts around the world have disputed this assertion, but the U.N. Security Council has considered tightening economic sanctions in response.

According to Phil Robertson, deputy Asia director of Human Rights Watch, Warmbier’s detention is another case of “political hostage-taking.”

“When North Korea gets into a diplomatic dispute with the U.S. government, they like to grab any American they can find and use them as bargaining chips,” he says.

Ever since the split of the peninsular in 1953, following an armistice that marked the de facto end of the Korean civil war, the secretive dynasty that still rules North Korea has excelled at brinkmanship — alternating between threats, displays of strength and conciliatory dialogue.

According to Brian Myers, associate professor of international studies at South Korea’s Dongseo University, the regime gains “domestic propaganda points when the foreigner is arrested, more points if a foreign VIP flies in to bail him out, [and] an easy signaling of openness … to foreign optimists by setting him free.”

Cathcart notes that the timing of the arrest — four days before the nuclear test — makes it unlikely that Warmbier was preemptively seized as a bargaining chip. “More likely is that public security makes the arrest, and then the propagandists figure out how to make hay from it,” he says.

Given that any visitor to North Korea might become a theoretical pawn in a geopolitical fracas (“the whole nature of authoritarianism contains an element of arbitrariness,” as Green puts it), ethnical questions are now starting to dog those who choose to visit the country, as well as the tour companies that facilitate those trips.

The U.S. State Department warns in strong terms against travel to North Korea, stressing: “Do not assume that joining a group tour or using a tour guide will prevent North Korean authorities from detaining you or arresting you.” Even the website of Young Pioneers, the tour company Warmbier used, says it provides “budget tours to destinations your mother would rather you stayed away from.” (TIME contacted several tour companies offering trips to North Korea for this article but all declined to comment.)

Certainly, the negative aspects of North Korean tourism are already manifold. Heavily supervised trips don’t allow for mingling with the locals. Trips are expensive and funnel cash to the repressive regime of Supreme Leader Kim Jong Un. And local guides inevitably bear the brunt in the event of any perceived trouble.

Experts believe that Warmbier will eventually be released, and will likely be treated well until that time, though “what the cost of that release will be is an open question,” says Green. Negotiations against nuclear proliferation and rights abuses must be put on the back burner, and concessions will likely be offered in order to arrange his return.

This releases pressure on a state that, according to a U.N. report last year, inflicts on its 25 million citizens “extermination, murder, enslavement, torture, imprisonment, rape, forced abortions and other sexual violence, persecution on political, religious, racial and gender grounds, the forcible transfer of populations, the enforced disappearance of persons and the inhumane act of knowingly causing prolonged starvation.”

That doesn’t appear much like a fun holiday destination. As Robertson puts it: “Any American who wants to go to North Korea outside an official capacity with official protections would need to have their head checked.” 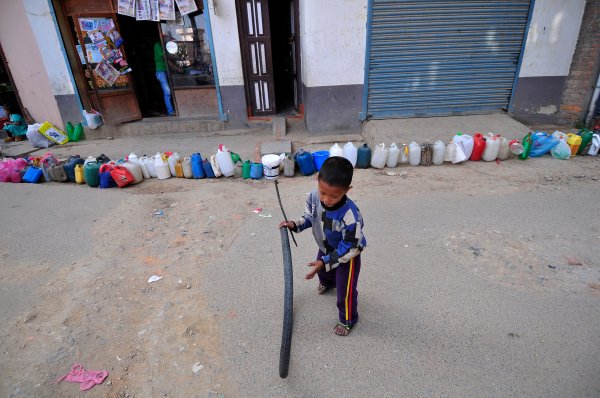 No Respite for Shortage-Hit Nepal
Next Up: Editor's Pick