Former neurosurgeon Ben Carson told a crowd in Iowa on Friday that the lessons his mother taught him growing up have helped carry him through the staff meltdown that upended his campaign.

Speaking in a coffee shop in rural Creston, Carson said that his mother “never felt sorry for herself” and taught her children to take care of themselves. “There was never any excuse that we could make that was acceptable. She would just say do you have a brain?” the presidential candidate said. “When you accept responsibility you do things in the appropriate way.”

“It’s just like recently, I had to change some things in my campaign because they simply weren’t working,” Carson continued. “These were people who were supposedly professionals, but they were not getting it done, and we changed it. And it’s working so much better now, it makes all the difference in the world. You always have to be willing to assess the situation and make the appropriate changes.”

Carson’s top campaign aides announced their resignations in late December, with Barry Bennett and communications director Doug Watts, along with deputy campaign manager Lisa Coen. The shakeup has led to a series of new campaign aides.

Now, Bennet has said that he is helping to advise the Trump campaign, telling TIME that he has wanted to support the eventual nominee. Carson’s new campaign chair, General Bob Dees, said that Bennett’s defection to the Trump camp “validates the decision that were made. We’re seeing a lack of character” from Bennett, Dees told TIME.

A tough race in Iowa between Sen. Ted Cruz and billionaire Donald Trump has largely left Carson behind, but a new Monmouth poll show the neurosurgeon in third place in the Hawkeye state, ahead of Sen. Marco Rubio.

Carson often talks about his childhood in poverty in Detroit, where he was raised by a single mother with a third-grade education. He told his audience in Iowa that constant reading helped give him an edge in school. “My mother did that: she saw that I was a terrible student, she recognized that people who were successful tended to be well educated.”

After Carson finished and began walking out the door, a reporter asked him whether he was happier with his new campaign staff. “Absolutely,” Carson said. “Yes, absolutely.” 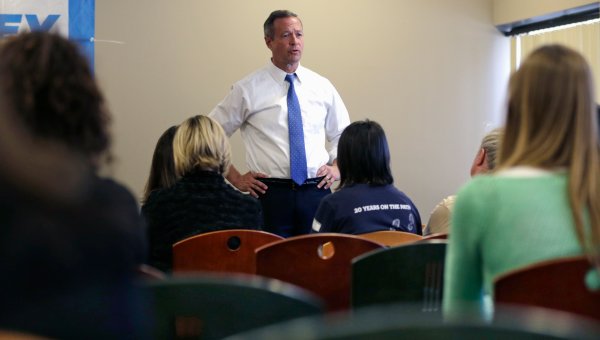