In recent weeks, Egyptian authorities have searched apartments across Cairo, arrested a medical doctor in a nighttime raid, seized activists sitting in a cafe, raided a publishing house and closed an art gallery. With a wave of arrests, the Egyptian state has intensified a crackdown on political opponents in the runup to the fifth anniversary of the Arab Spring uprising that ended the nearly 30-year-long dictatorship of Hosni Mubarak on January 25. Critics say the renewed clampdown is a sign that the authorities, led by President Abdel Fattah Sisi, remain seriously concerned about protests or other sources of instability.

Human rights groups say that dozens of apartments have been searched or raided by the authorities, often at late and night, and primarily in the central Cairo neighborhoods near Tahrir Square, which was the scene of iconic demonstrations during the 2011 revolution. Egyptian security officials quoted by the Associated Press said more than 5,000 homes had been searched, although that figure could not be independently verified. As a result of the security campaign, numerous activists and members of human rights organizations have gone into hiding in order to avoid arrest.

Some activists said they feared not simply being detained, but disappeared. Rights groups have documented dozens of cases in which Egyptians have gone missing at the hands of the security forces. “There is a sense that the police are acting completely beyond the law,” said Mohamed Lotfy, the director of the Egyptian Commission for Rights and Freedoms. Lotfy went into hiding in late December. “If you are a voice critical of the government, you are rightly thinking you might be the next one.”

Critics say the recent arrests are emblematic of the reemergence of Egypt’s security state in the two and a half years since the military deposed the elected Islamist President Mohamed Morsi in 2013. Following Morsi’s ouster, the security forces launched a crackdown that left more than a thousand dead and thousands more in prison. According to human rights groups, the post-2013 clampdown led to an upsurge in arbitrary detention, torture, and the lethal use by police, practices that many Egyptians hoped would be abolished in the 2011 uprising.

The current security sweep appears to be targeting a wide range of groups perceived as opponents by the state: human rights workers, Morsi supporters, and members of various protest groups. Among those arrested include Taher Mokhtar, a medical doctor campaigning to provide adequate treatment for political prisoners. He and two roommates were detained following a police raid last week. In a separate raid the same week, police arrested Ahmed Abdel Gawad, an editor at the independent news website Masr al-Arabia. In late December, four members of the pro-democracy April 6 Youth movement were arrested and reportedly charged with protesting illegally and participating in a banned organization.

The authorities have also raided cultural institutions. In late December, authorities searched and then closed Townhouse Gallery, an acclaimed independent art institution in downtown Cairo. The same week, officials including members of the censorship authority raided the offices of the independent Merit Publishing house.

A spokesperson for Egypt’s Interior Ministry, Brigadier General Hatem Fathy, insisted the recent searches of Cairo apartments were routine checks to make sure residents had registered their presence with the police. “This is a very old practice. It’s not something related with the anniversary of the 25th of January,” he said. “It’s just the apartments. Some of them are used for vice crimes, for prostitutes, or for instance stores for drugs,” he said.

But human rights groups dispute the government’s account, saying the raids are part of a pattern that indicate the state is concerned about the prospects for unrest over the anniversary of Tahrir Square. “It’s like a panic attack that caught the government because of its fear of protests. This can give a message of how the government can perceive itself, as how it came to power in a very controversial way,” said Mohamed Elmessiri, who documents rights violations in Egypt for Amnesty International.

Read More: Egypt Detains a Top Journalist as Fears of a Crackdown Grow

President Sisi is the armed forces chief who led the 2013 military takeover. In a speech in December, he exhorted Egyptians not to protest on the anniversary of the uprising. “Why am I hearing calls for another revolution? Why do you want to ruin [Egypt]? I came by your will and your choice and not despite it,” he said according to Reuters.

Yet despite the government’s attitude, few in Egypt predict that the 25th will bring protests of any size. Aside from informal campaigns on social media, few groups have called for mobilization on the anniversary, and the use of lethal force by the police means that any protest carries a high risk.

But regardless, the crackdown continues to unfold, spreading a sense of fear among critics of the government. Human rights defender Ahmed Abdullah, one of Lotfy’s colleagues at the Egyptian Commission for Rights and Freedoms, narrowly avoided arrest on January 9. Three armed men, who Abdullah believes were plainclothes police officers, came searching for him at a coffee shop he frequents in the Cairo neighborhood of Agouza, questioning the café employees and asking about the activist’s whereabouts.

Abdullah learned of the incident when he arrived at the café after the fact. He said what worried him particularly was the fact that the men wore civilian clothes and presented no arrest warrant. As far as he is aware, he is not under investigation for any crime.

“They could have done anything to me,” Abdullah said in a phone interview on Friday. “They police can get me and the police can say ‘we have nothing to do with this. We don’t know where he is.’ Like the cases we investigate, of enforced disappearance.” 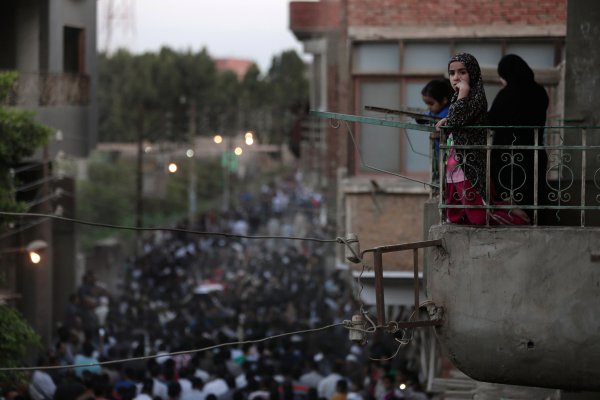 Inside Egypt's Internet Shutdown
Next Up: Editor's Pick