Here's What Humanity Wanted Aliens to Know About Us in 1977

Flying aboard Voyagers 1 and 2 are identical golden records, carrying the story of Earth far into deep space. The 12 inch gold-plated copper discs contain greetings in 60 languages, samples of music from different cultures and eras, and natural and man-made sounds from Earth.
SSPL/Getty Images
By TIME Photo

It was nearly 30 years ago—Jan. 24, 1986, nearly a decade after it had been launched—that the Voyager 2 spacecraft made its closest pass to Uranus and, as TIME phrased it, “taught scientists more about Uranus than they had learned in the entire 205 years since it was discovered.”

But the sophisticated equipment that sent information back to NASA wasn’t the only important thing on board the spacecraft. The Voyager 2, like the Voyager 1, carried with it a record, plated in gold, on which had been encoded sounds and images meant to “portray the diversity of life and culture on Earth,” according to NASA. The message from Earth was curated by a committee led by Carl Sagan and contained 115 images of “scenes from Earth.”

It was estimated in 1977, when the Voyagers launched, that it would take 40,000 years for them to reach a star system where there might be a being capable of deciphering the record. But, should that ever happen, what exactly could those photos say about humanity? Here’s a hint, from a few of the pictures on the golden record, and our best guesses at how hypothetical aliens might interpret them:

A fully grown Earthling, or maybe a demonstration of the kinds of weapons available on Earth:

Portrait of a worker engaged in thinning out a densely regenerated area of trees in Nicaragua in May 1971.
Yutaka Nagata—UN Photo

An Earth city building at sunset, or maybe the spacecraft with which a large number of Earthlings will come find you:

Earth traffic jam, or maybe why Earthlings will be fleeing to move to your home planet:

Earth scientist at work, or maybe an Earthling with goggles that can see you right now:

A student uses a microscope in a health center in Mogadishu, Somalia in 1970.
Rice—UN Photo

How this thing got to you, or maybe a missile:

Voyager 2 launching aboard a Titan-Centaur rocket in Cape Canaveral, Fla., on Aug. 20, 1977.
NASA

An image of early Earth spaceflight, or a being we abandoned in space:

Celestial bodies near the Earth, Jupiter, Mercury and Mars, or maybe the places we’ve already conquered:

Where to find us, or maybe where to stay away from: 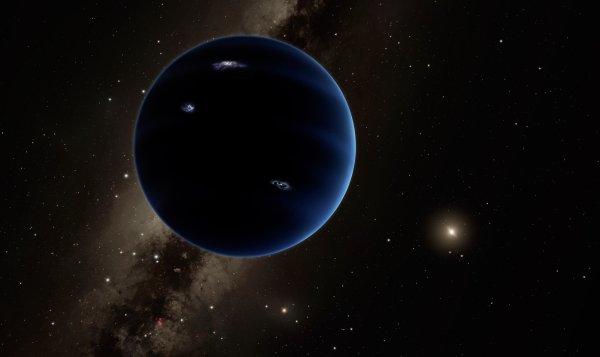 What Would You Name the New 'Planet 9'?
Next Up: Editor's Pick