Pope Francis talks with Apple CEO Tim Cook during a private audience in the Vatican, on Jan. 22, 2016.
Osservatore Romano—EPA
By Daniel White

Neither party has disclosed what was discussed, but afterward, the Pope spoke about technology and social media, calling modern forms of communicating “a gift of God,” according to Reuters. Pope Francis, 79, delivered the message for the Roman Catholic Church’s World Day of Communications.

“Emails, text messages, social networks and chats can also be fully human forms of communication,” he said. “It is not technology which determines whether or not communication is authentic, but rather the human heart and our capacity to use wisely the means at our disposal.”

The Pope is admittedly a “disaster” when it comes to technology, but this is his second meeting in a week with a tech industry heavyweight—he sat down with former Google CEO Eric Schmidt last week. Cook—or “Signor Timothy Donald Cook, Amministratore Delegato di Apple”—met with the Pope in Rome, according to the Pontiff’s daily schedule posted to Twitter.

There is no word on whether Pope Francis was able to get the two tech giants to lay down their arms and comes to terms over competing mobile phone platforms. 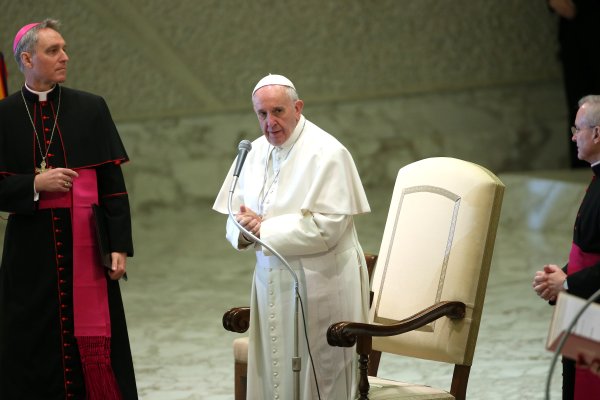 Vatican Offers Homeless New Mother a Place to Live After She Gives Birth Nearby
Next Up: Editor's Pick