I Wore An Exoskeleton That Gave Me Super Strength

Josh Raab for TIME
By Alex Fitzpatrick and Josh Raab

Construction workers have some of the toughest jobs around, getting up before the crack of dawn to do hard physical labor for hours on end. All that digging, drilling and welding can take a real toll on their bodies — construction workers have some of the highest rates of musculoskeletal disorders per capita, according to the Bureau of Labor Statistics. Those injuries affect individual workers, reducing the number of years they can stay on the job. They’re also a drain on construction companies, who are responsible for some medical costs as well as hiring and training replacements when employees are hurt.

Ekso Bionics thinks it has a solution. The Richmond, Calif.-based company, which has roots at University of California, Berkeley, has been working on exoskeleton technology for over a decade. Often, its designs have military or medical uses in mind. Ekso units are being used at rehab centers to help disabled people walk, for instance, as seen in the video footage below. But its latest suit is aimed squarely at the construction industry, helping workers lift and use heavy power tools for long stretches of time by literally taking the weight off their backs.

With no electrical components like motors or sensors to speak of, Ekso’s new suit is one of the lowest-tech pieces of high-tech gear I’ve ever seen. But after using it, I’m convinced of its potential. Strapping in felt like something between putting on a backpack and turning into Iron Man. The suit is designed to transfer objects’ weight to the ground via stabilizing joints on the wearer’s sides. That, plus a specialized “arm” from a company Ekso recently acquired, help the wearer manipulate power tools — in my case, a grinder — without having to support their weight.

Wearing Ekso’s suit, I felt like I could grind away for hours, and I’m nowhere near strong enough to do that unassisted. It’s easy to imagine the suit could be even more helpful when worn by someone who actually has the strength of a construction worker rather than a technology writer.

“The industrial device goes back to our roots in military, because it uses a strategy we discovered working on military exoskeletons,” says Nathan Harding, Ekso’s co-founder and CEO. “We were worried about the fact that those exoskeletons were consuming so much power. We were able to develop a design, it’s an architecture of joints that inherently takes load, but it lets the person make natural motions that they need to do.”

If Ekso’s new suit has any drawbacks, it’s that it was tough to move around while wearing it. So it’s not quite an Iron Man suit just yet. But Harding added that Ekso is adding more robotic functions to its future suits to help with tasks that require more mobility — and capture more of the growing construction market, projected to be worth $10.3 trillion by the end of the decade.

“We’re going to start with these passive devices that don’t use any power at all, and we’re going to gradually put bionics or robotics into the machines to get more and more of the jobs at the work site,” says Harding. For now, Ekso is working with some of the world’s biggest construction companies — it won’t name names — and refining its design based on their feedback. 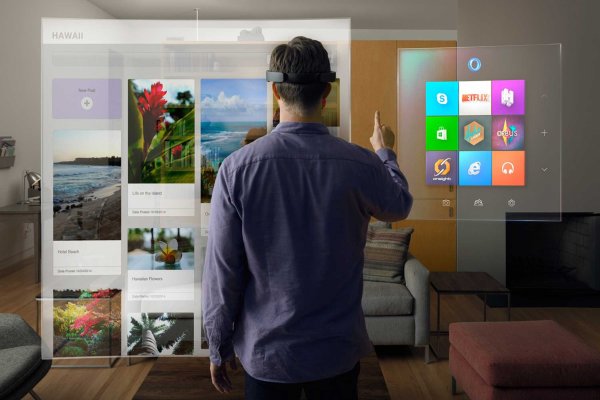 What Impressed Me the Most About Microsoft’s HoloLens
Next Up: Editor's Pick