East Coast Braces for Blizzard That Could Cripple Region

The National Weather Service expanded its blizzard watch to include New York City and upgraded its guidance for the Washington, D.C., area to a warning on Thursday, as the Eastern seaboard of the U.S. braced for a storm that could bring 2 ft. of snow and cripple travel when it hits this weekend.

The country’s largest city may experience up to a foot of snow and damaging winds on Saturday and Sunday, according to the NWS advisory. New York City residents should also prepare for dangerous travel amid whiteout conditions.

The advisory follows previous advisories for the Washington, D.C., area, which is expected to get the hardest hit. The region, including parts of Northern Virginia and Maryland, has a blizzard watch from Friday afternoon to late Saturday and may receive 12 to 18 in. of snow. The D.C. area got a smaller amount of snow Wednesday evening. City officials announced Thursday afternoon that the D.C. Metro would close for the weekend because of the expected severity of the storm.

United Airlines announced that it would suspend flights in and out of Dulles and other mid-Atlantic airports on Friday afternoon, with a plan to resume them on Sunday.

Governors in North Carolina, Maryland and Virginia, as well as the mayor of Washington, declared a state of emergency in their states on Thursday. “All Virginians should take the threat of this storm seriously and take necessary precautions now,” said Governor Terry McAuliffe in a statement. Potential problems include “travel disruptions and possible power outages, ” he said.

The storm threatens to hinder travel throughout the region with major U.S. airlines offering to rebook travel for free and saying customers may expect cancellations and delays. NWS alerts warn the region’s resident to avoid driving in blizzard conditions. 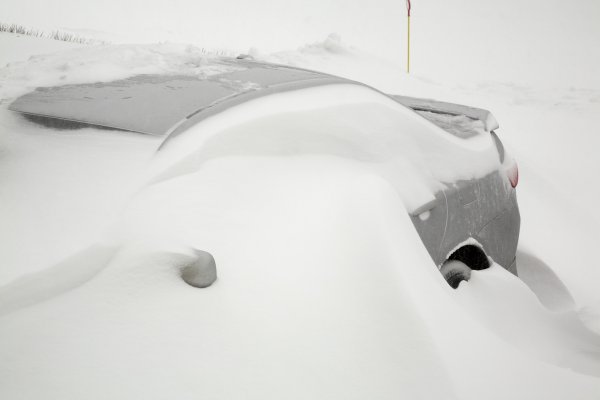 Apparently Some Dude in Canada Drove a Car Covered in a Giant Snowbank
Next Up: Editor's Pick