If it were up to a casting agency, Bernie Sanders would be the last pick for President. His shock of disheveled white hair, those wild gesticulations, the defiant disdain for ceremony and pretension all paint him as more character actor than leading man. His wife Jane likes to tell a story about a White House state dinner at which only Sanders and Nelson Mandela refused to don the customary black tie. “Never have I worn a tuxedo,” Sanders boasted to TIME in a recent interview.

But the Democratic Party is not Hollywood, despite Republican claims otherwise. It is a restless, rebellious group, partial to insurgents even in times of plenty. This helps explain Sanders’ rise in the polls and the recent struggles of Hillary Clinton, who now trails him in New Hampshire by as much as 27 points and has watched her lead shrink in Iowa. Many people, especially younger voters, see Sanders as the truth-telling iconoclast of the moment. “He’s a little bull in a china shop,” said one supporter, Darrell Freemind, 36, at a rally on Jan. 18 in Columbia, S.C.

The problem for Sanders is that bulls don’t have a good record of becoming Democratic nominees, let alone Presidents. Recent history is full of rising candidates–the Rev. Jesse Jackson in 1988, Bill Bradley in 2000 and Howard Dean in 2004–who captured the liberal imagination only to stumble with primary voters. “They love insurgents, because they are mad at the government,” Dean recently said to the Huffington Post. “But at the end of the day, if you want to be President, you’ve got to look like one, and I never could bring myself to do that.”

David Axelrod, who helped Barack Obama move beyond his liberal barn-burner act to capture the nomination and the White House, agrees. Now that Sanders has excited the base, he argues, the Vermont Senator must move beyond his economic message. Obama did something similar in 2008, when he transitioned away from a focus on his early opposition to the Iraq War. “To take the next step, he would need a second act,” Axelrod says of Sanders. “The mantra of banks and billionaires is a clarion call, but to be more than a messenger, he needs a wider lens.”

When asked to respond to the warnings of party graybeards, Sanders rejects the conventional wisdom wholesale, saying it fails to capture the spirit of his coming political revolution. “The message that we have is for the middle class, working families and low-income people all over this country,” he tells TIME two weeks before the Iowa caucus. “Virtually all of the ideas that I am bringing forth are supported by the American people.” Continue hitting the populist notes, he says, and he’ll continue to broaden his appeal and energize his supporters. “We think that contributes to a large voter turnout,” he says, “and large voter turnout means victory.”

His campaign has taken clear steps to blunt the Clinton campaign’s efforts to paint Sanders as a modern-day Man of La Mancha who will never be able to win the White House. Recent mailers in Iowa from the Sanders campaign call him a “pragmatist” who “was cited as one of Congress’ most successful brokers.” One of his television ads running in Iowa describes him as a “practical and successful legislator” and an “effective leader.” It’s a message he has brought to the stump as well. “People say, ‘What we’re hearing, Bernie, is that people like your ideas, but they think you can’t win–you’re a nice guy, but you can’t beat the Republicans,'” Sanders thundered at a rally in Carroll, Iowa, on Jan. 19. “That’s wrong.”

Head-to-head polls do show Sanders out-performing Clinton in early matchups against Donald Trump as the hypothetical Republican nominee. But those polls are rarely predictive, and over the coming weeks Sanders will face the task of selling programs that Obama’s advisers believed to be too liberal–like universal health care, free public college and expanded Social Security benefits, paid for by new taxes on the wealthy and the middle class. His proposed “Medicare-for-all” health care system would replace the Affordable Care Act and private insurers with universal coverage, in the style of European countries and Canada. Sanders says the plan would on the balance save most families thousands of dollars a year in reduced health care costs, even though it would require a 2.2% health care income tax and a 6.2% payroll tax on employers. And Sanders would pay for tuition-free public colleges and universities with a new tax on Wall Street transactions. Clinton, by contrast, has long been careful to maintain that she would refrain from tax increases on middle-class families.

The more fundamental challenge, however, may have to do with the coalition Sanders has been able to attract. So far he has been able to either split or win the white Democratic vote in early state polls, while racking up gains among young voters. But he still trails Clinton badly among the other key parts of the Obama coalition, including black and Latino voters who are essential for winning the Democratic nomination. “Obama did what he did because he was going to be the first black President in history,” says Joe Trippi, who managed Dean’s 2004 campaign. “I don’t know how Bernie does that.” Recent criticism over Sanders’ refusal to consider a reparations bill for slavery because it is “divisive” will not help. “No one knows who the hell Bernie Sanders is,” says Democratic New York Representative Charles Rangel, referring to black voters.

All the difficulties might explain why the candidate and his aides have avoided setting expectations throughout Sanders’ nine-month journey from blip to blockbuster. It’s a what-the-heck campaign, run by well-educated guesses and long-shot bets, not science and inevitability. It took nearly six months before they even hired a pollster. Sanders sometimes seems as surprised as anyone else that the political revolution has caught on. “I don’t have a magic formula,” he says. “If you’re asking me has the campaign moved faster and more successfully than I thought it would, the answer is yes.”

Win or lose in February, Sanders is preparing for a long race against Clinton. He has told his aides that he aims to be in until the Democratic National Convention, no matter what. With 1.2 million Americans giving to his campaign, millions of dollars in the bank and bigger ground operations than Clinton in some states, he is well positioned to make good on the promise of, at minimum, shifting the political discourse, just as Trump has done with the GOP. “We have got to revitalize American democracy,” he likes to say. That is a role Sanders can play even if he isn’t cast as the lead.

–With reporting by ZEKE J. MILLER/CARROLL, IOWA, and JAY NEWTON-SMALL/WASHINGTON 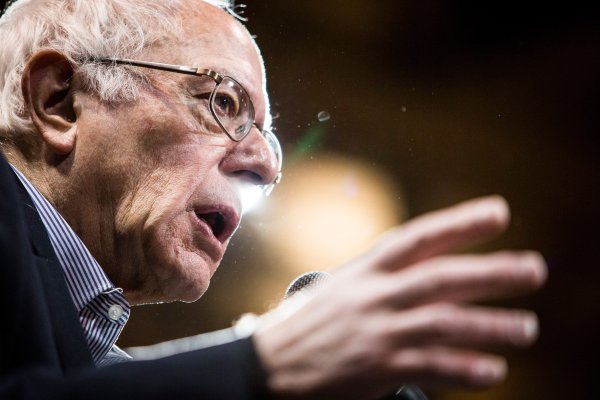 Sanders Talks With TIME About Winning the White House
Next Up: Editor's Pick