Donald Trump Is a Mother’s Nightmare

As a mother, I feel especially alarmed by Donald Trump’s high poll numbers, considering his public persona is marked by irrational behavior and excessive hostility toward those who do not acquiesce to his demands.

Like many other parents, I am accustomed to witnessing such behavior at times—from young children, whose brains are not yet developmentally capable of tuning out their egos and impulses. Seeing it from a grown man—especially one asking to be entrusted with one of the world’s most powerful nuclear arsenals—well, that’s another thing altogether.

If you were a child in the late 80’s or 90’s, or if you parented a child during the same era, you may recall Robert Fulghum’s iconic work All I Really Need to Know I Learned in Kindergarten. A fixture on The New York Times bestseller lists in 1989 and through much of 1990, the eponymous essay from this compilation book discussed the significance of principles taught in kindergarten classrooms at the time.

A poster for the book hung on the wall of my 10th-grade English classroom. Throughout my education, quotes from Fulghum’s credo surfaced everywhere, from writing assignments to commencement speeches. Its words are etched in my memory and, thanks to my parents’ guidance, remain instilled in my conscience.

“Share everything. Play fair. Don’t hit people. Put things back where you found them. Clean up your own mess. Don’t take things that aren’t yours. Say you’re sorry when you hurt somebody.”

Watching Trump’s candidacy progress from punch line to possibility, I can’t help but reflect on these lessons and the inevitable questions they raise about his sensibility as a prospective world leader.

What lies beneath Trump’s tough-talking exterior? Are a killer business instinct, financial wealth and celebrity more useful in the Oval Office than intuition, empathy and self-awareness? And what about Trump’s emotional IQ? Has he mastered the life lessons that lead to good citizenship and, importantly, wise leadership?

As a writer, I believe in letting people’s words speak for themselves. The daily headlines filled with Trump’s quotes do an excellent job of illustrating his disregard for even the most fundamental of kindergarten rules. His words and actions showcase attitudes that any parent knows would not be tolerated in schools or workplaces—unless, of course, you just happen to own the building.

In fact, I received a surprising affirmation of my concerns reflected in Trump’s own words. In a New York Times piece from last September, he told biographer Michael D’Antonio: “When I look at myself in the first grade and I look at myself now, I’m basically the same. The temperament is not that different.”

And that is precisely the problem.

Most of us look at the children in our lives and see their unlimited potential to grow—not just physically and academically, but emotionally, spiritually and psychologically. With love, attention, education and guidance, they will learn the value of the greater good and understand why it is sometimes necessary to put others’ needs before their own. Our children will discover the joys of confidence and the pitfalls of egotism. They will come to appreciate the necessity of choosing their words wisely.

Unfortunately, Trump has offered no such promises along an insult-strewn campaign trail. When considering the possibility of a Donald Trump presidency, I feel genuine fear—yes, full-blown, five-alarm, lose-sleep-at-night Mom angst—for our nation and, especially, for our children.

Our children’s physical security demands a president who won’t gamble on playground tactics when negotiating difficult foreign and domestic issues. Their emotional well-being requires a leader who condemns misogyny, xenophobia and brazen bullying instead of embracing them. Our children deserve a better example of what the highest office in this nation stands for. 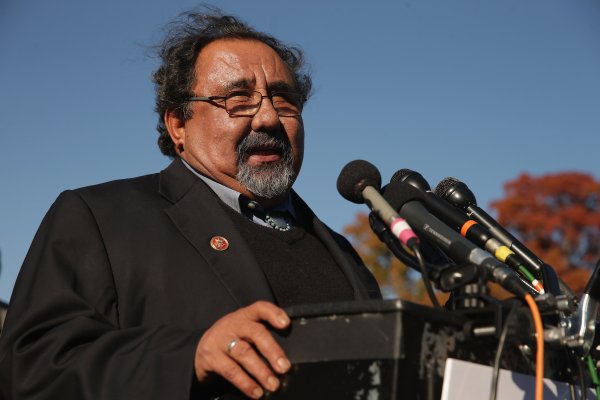 Citizens United Undermines Our Democracy
Next Up: Editor's Pick