These 5 Facts Explain How Technology Is Shaping Our World

Every year, 2,500 or so global political leaders, businessmen and thinkers descend on Davos, Switzerland, for an annual meeting to discuss the world’s big issues. This year’s overarching theme is the disruptive nature of technology—these five facts explain how digital-age technologies have already transformed our world, for better and for worse.

1. Wealth boosted by technology has not been equally distributed

Technology has made the world richer overall, but not everyone has benefited. In 2009, the world’s top 1 percent held 44 percent of the world’s wealth; by 2014, they had 48 percent. By 2020, it is estimated that the 1 percent will own 54 percent of global wealth. That is not the direction the other 99 percent wants those numbers moving. And now thanks to technology, they can vent their frustration in increasingly visible ways.

At heart, what’s transpired is that technology has hollowed out the demand for low-skilled workers, who have been the first ones replaced by automation. But they’re not the only ones who should be worried. A 2013 study from Oxford University predicts that up to 47 percent of U.S. jobs will be computerized in the next 10-20 years. And with the rise of websites like WebMD, LegalZoom and E*Trade, even white-collar professionals like lawyers, doctors and financial middlemen are under threat from technology. Are any jobs safe? For the time being, positions that require empathy—say, nurses over doctors—are better positioned to withstand the technological blow.

2. Doctors and scientists have used technology to tackle problems that once seemed insurmountable

Doctors have played a role too of course. HIV has been transformed from a death sentence to a manageable disease in just thirty years. Bigger things are still on the horizon. According to the most recent data, venture capital firms poured $11 billion into healthcare companies in 2014, a 30 percent jump over the previous year. These funds are being used to develop supercomputers that crunch mountains of data to offer better diagnosis and treatment, and to better understand our genetic building blocks and how to use them to fight off disease. To put our progress in perspective, a full human genome sequence cost $100 million in 2002. Today, it can be done for $1,000; by 2020 it may cost less than a cup of coffee. Technology can be a double-edged sword, but at least when it comes to our health (if not necessarily our medical professionals), it has largely been a force for good.

Today, there are more than 80,000 education apps available for download through Apple’s App Store; 72 percent of those are aimed at toddlers and preschoolers. But while parents and app developers have obviously embraced the tech education revolution, a recent report by the OECD shows that the link between technology and educational performance is murky at best. The OECD found that across more than 40 countries, students who use computers for schoolwork—but for a slightly below average amount of time—tend to do better than average on reading exams. Students who spend an above-average amount of time on a computer at school performed worse on the same test, scoring lower than students who don’t use computers at all. Technology is not a silver bullet. How helpful it is depends on how you use it.

4. Technology can help save the planet…

The World Economic Forum just released its annual 2016 Global Risks Report, ranking climate change as No. 1 in terms of impact. That makes sense—the World Bank estimates that climate change may push more than 100 million people into extreme poverty by 2030. Of course, technology has played a role in our current predicament. The shale revolution—which at its core is a technological revolution—has given a new lease on life to the oil and gas era. That may be good for falling oil prices, but it’s horrible for our environment.

But now the good news. Since Barack Obama was elected in 2008, the price of solar energy has fallen 78 percent, and the cost of wind energy has also fallen by 58 percent, thanks largely to technological advancements and economies of scale. In isolation, these numbers are not impressive. But what makes the difference is that the global economy grew by 3 percent in 2014 while world emissions remained flat. Cheaper alternative energy is the best hope the world has left. People are not willing to fundamentally change their lives for problems far off in the future, even ones as potentially catastrophic as climate change. To avoid the worst effects of climate change, alternative energies need to become as cheap and reliable as their carbon-emitting counterparts, and quickly.

5, …And also help destroy it if we’re not careful

Technology has also created a whole new set of global security concerns. The thoroughly modern phenomenon of cybercrime and economic espionage is estimated to cost the world more than $445 billion every year. That’s roughly 1 percent of global income. And while it hasn’t happened yet, the fear that cyberattacks can spill over and trigger real-world conflicts remains an ongoing concern.

Technology has also changed the face of modern warfare. A decade ago, the Pentagon had a stockpile of fewer than 50 drones; today it has an arsenal of about 7,000. The Pentagon estimates that China will build nearly 42,000 drones by 2023. Others will follow suit. Yet another possible complication.

But the most worrisome development? Technology has given terrorist groups like ISIS an unparalleled platform to spread their messages of hate. The knowledge needed to build bombs in the comfort of your own home is now just a few short clicks away. Technology is capable of empowering every single individual in the world, even the worst of us.

Much of today’s coverage on technology is focused on whether technological advancements are good or bad for the world we live in today. We should put aside these value judgements and focus on how technology will simply make the world different going forward. 65 percent of children entering primary school today will end up working in jobs that don’t even exist yet. Our time is better spent figuring out how to live in this new world rather than lamenting the old one. 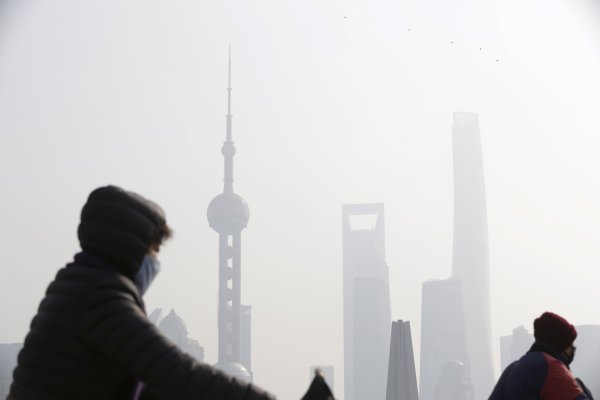 366 of China's Cities Don't Have Safe Air: Greenpeace
Next Up: Editor's Pick